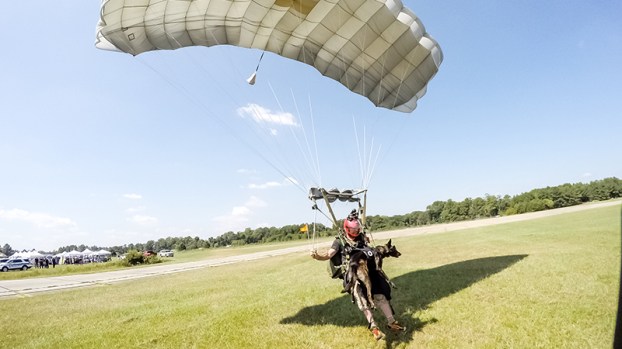 James Hatch and his dog, 5-year-old Dutch shepherd Mina, land after their skydive at Skydive Suffolk on Saturday.

Skydive Suffolk tosses dozens of skydivers per week out of its airplanes high above the Suffolk Executive Airport. But those skydivers are usually human.

They made an exception on Saturday, when Mina, a 5-year-old Dutch shepherd, made her eighth and final skydive with her owner, James Hatch, of Norfolk.

“The thing with dogs is if you’re cool, they’re cool,” Hatch said. “She does good in the air, but she doesn’t really care much about the plane. It’s too loud.”

Hatch, a retired Navy SEAL of nearly 26 years, is the founder of Spike’s K9 Fund. He started the nonprofit organization about two years ago to support working dogs with equipment and medical care. 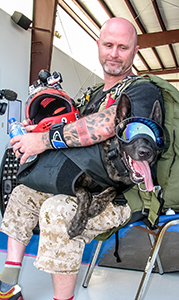 Hatch and Mina relax in preparation for their skydive.

During Hatch’s many deployments, several working dogs gave their lives to save Hatch and others in crises, including a hostage situation. Spike, the organization’s namesake, was the most memorable.

After retiring from the military, Hatch needed a new outlet and noticed while working with some local police K9 units that they didn’t have everything they needed.

“I saw some dogs that needed stuff that the municipalities just couldn’t cover,” he said. “And I needed to do something after I retired from the military that my heart was really in.”

After Krijger, a Norfolk Police Department K9, died in the line of duty this January, Hatch helped secure a donation from CNN’s Anderson Cooper to outfit all of the police dogs in Hampton Roads with a ballistic vest.

“I think he would have probably survived if he had a ballistic vest,” Hatch said of Krijger, who was shot by a suspect.

The Suffolk Police Department received its vests in the spring, but one — sponsored by Skydive Suffolk — was officially presented at Saturday’s event.

“They are nice,” said K9 Officer Rosario Tumminello, whose canine partner Rommel received the Skydive Suffolk vest. “They’re very lightweight, and the dogs maneuver in them well. It’s kind of a little bit of extra assurance.”

Saturday’s event at Skydive Suffolk was known as “Carcasstossing for K9s,” using the military slang for skydiving. It featured discounted skydives, food, vendors, a dunk tank and more. Hatch said he wanted it to be a community festival to raise awareness of working dogs, as well as a fundraiser.

Hatch is an experienced skydiver, and his jumps with Mina have not been just bonding time. There is a purpose, he said.

“From my time in the military, I realized they needed better equipment” for the dogs that have to skydive, he said. He wanted to help develop better harnesses for the dogs, so he started taking Mina along for the ride.

The harness he has developed attaches to his own harness and keeps her legs and tail cocooned close to her body, so they can’t get tangled in the parachute lines.

After Mina and Hatch arrived safely back on the ground, a man in a bite sleeve was waiting for Mina to attack.

“It’s kind of a reward, really, for putting up with me in the sky,” Hatch said.

Visit www.spikesk9fund.org for more information on the organization.

The Suffolk Parks and Recreation Department hosted an interactive community outreach program for local teenagers this weekend as they prepared... read more