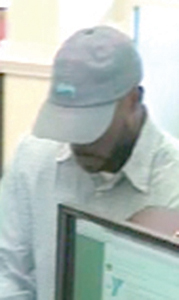 A local bank is offering a $10,000 reward for information leading to the arrest and conviction of a suspect in a Monday bank robbery.

The robbery happened at the Farmers Bank in the 1000 block of West Washington Street. It was reported at 2:02 p.m.

According to a city press release, an unknown adult black male armed with a firearm entered the business and demanded money from the teller. He fled on foot headed east on West Washington Street with an undetermined amount of currency. No one was injured during the incident.

The suspect is described as 5 feet, 11 inches to 6 feet tall, weighing about 160 to 180 pounds, with a trimmed beard, wearing a light-colored, long-sleeved collared shirt, dark-colored pants, dark shoes and a light-colored ball cap.

Couple, Planters sponsor back to school

Steve and Patricia Watson couldn’t have predicted an annual event they started just for their grandchildren and their friends would... read more