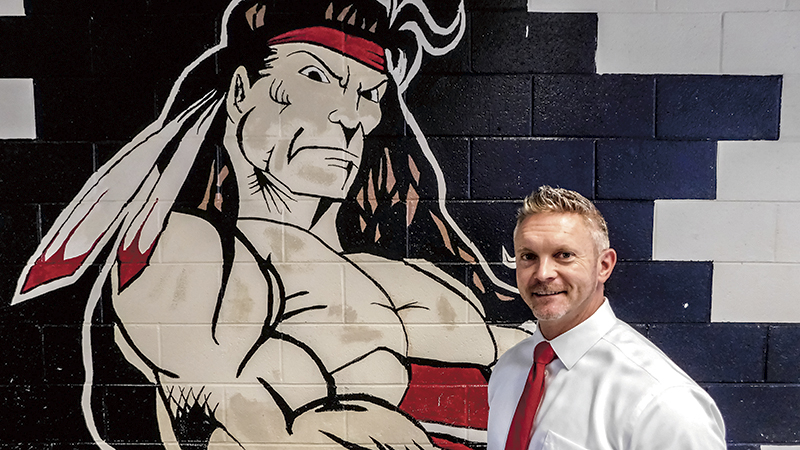 The school will be familiar to returning students, but they may notice a new face in the principal’s office.

Daniel O’Leary Jr. has replaced the retired Thomas McLemore, who had served at the school for nearly two decades. Ironically, in 1990, O’Leary got his start in teaching at Nansemond River.

So far, the new principal felt welcomed with open arms. 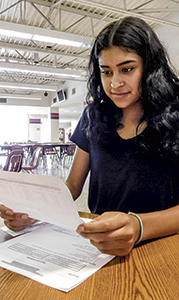 Eliana Herrera, a sophomore at Nansemond River High School, reviews her course schedule for the upcoming semester at the school’s orientation on Wednesday afternoon.

“Everyone has a smile on their face and says ‘Hello,’” O’Leary said.

Melissa Herrera, one of the mothers in attendance, said the orientation made her feel more in tune with the school.

“I get a feel of how the classes are and who is teaching them, and it’s an opportunity to see what they are going to be learning,” Herrera said.

Herrera’s daughter, Eliana, a sophomore, felt more at ease at this year’s orientation but she recalled how nervous she was last year.

“It was so nerve-wracking, because there were so many people,” Eliana said.

O’Leary said what distinguishes his school from others in the area is the level of student participation in and support for extracurricular activities.

“Our kids are involved in something positive,” he said. “The Nansemond River kids really support each other, whether it is through the Nansemond River Rowdies or a friend that wants to support one of their friends in a play.”

The staff as a whole is excited about the upcoming school year.

“There is a huge tradition of excellence,” O’Leary said. “The administration team and teachers are looking for continual improvement.”

“We have good people who love the kids,” said David Lawson, a 12th grade English teacher. “We are all on board. We aren’t perfect but we are a decently oiled machine.”