Girls’ volleyball season is under way, and the Nansemond-Suffolk Academy Lady Saints have gotten off to a good start. They defeated Hampton Roads Academy 3-0 on Tuesday, the first step toward the goals the Lady Saints want to accomplish this year.

“Our first match was a good gauge of where we are,” coach Robyn Ross said. “We have a lot of youth, and for the first game they executed well.”

NSA will count on its four seniors — Logan Harrell, Livi Bono, Nicole Wright  and Lindsay Knierbein — to lead a team mostly filled with freshmen and sophomores. On Tuesday, the Saints also gave two freshmen significant time on the court.

Though playing as a freshman and being expected to contribute at the varsity level could be stressful, Ross does not see it that way. Getting extensive reps in varsity action can speed up a freshman’s growth, which will be better for the team in the long run.

“We focus on how we want to play in games through practice,” Ross said. “When it is game time, everything is natural and easy for them because we have practiced our thought process.” 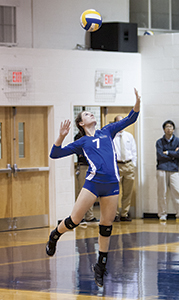 Senior Logan Harrell prepares to deliver a serve in a game last year. The Lady Saints won their first game for the 2016 season against Hampton Roads Academy on Tuesday.

Ross said the team’s offense was one of its weaknesses last year. This year, she is looking forward to the offense becoming more explosive.

“Our offense was one of our biggest weaknesses last year,” Ross said. “Last year we won mostly because of our speed. When playing against good teams, we will struggle if our offense is not better.”

Setter Nicole Wright had six kills and 30 assists on Tuesday, and Ross is excited about how she will continue to develop this year.

“Nicole is in the best shape of her life,” Ross said. “She came into the season the best player she could be. I am excited to continue to see her development in her last year.”

Winning, accolades, and all the success that comes with sports are fine, but that is not what NSA prides itself on. Ross wants her team to learn life lessons through volleyball. Volleyball is temporary, but life lessons are not.

“I focus a lot on growing the person inside of them,” Ross said. “Volleyball is short term. The lessons they learn through their hard work is what will help them in life.”

Helping her players grow is the very reason that Ross coaches. She knows that coaching is a sacrifice in itself, and if she were doing it for any other reason it wouldn’t be worth it. 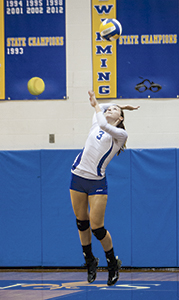 Senior Livi Bono prepares to deliver a serve in a game last year. The Lady Saints next play Cape Henry Collegiate on Thursday.

“Winning and the success that comes with it is fine,” Ross said. “The life lessons are more important. Teaching life lessons through the sport eventually leads to winning.”

The Lady Saints will play their second game tonight at 6:30 p.m. at home against Cape Henry Collegiate. Ross said she wants her girls to limit their errors.

“We have a lot of room to improve,” Ross said. “We worked and planned really well the first game. We will clean up errors so that we don’t make the same ones each game.”

The Lady Saints want to continue to keep building on their offensive pressure so that they can catch their stride at the right time of the season.

LHS chips away at golf problems

After starting its season in a bind, the Lakeland High School golf team has made great progress, both individually and... read more