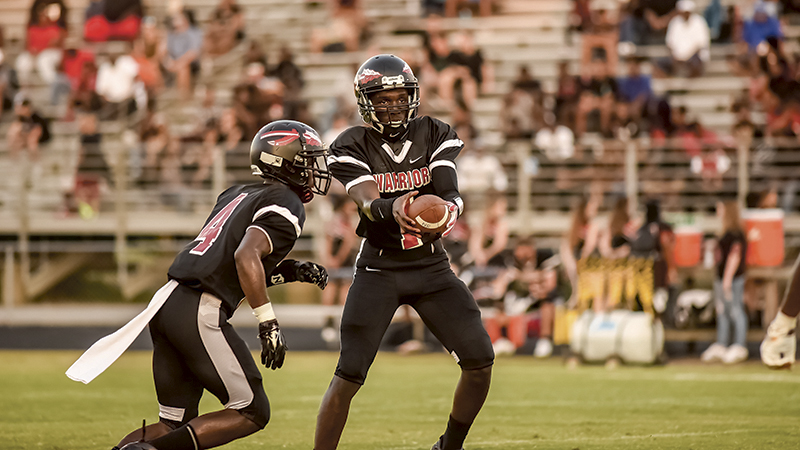 DyQuan McGhee hands off to JeVon Waller. Waller ran for 130 yards against Menchville.

Coach Kevin Knight is excited for the Cavaliers to open up their season. The game may be postponed due to a tropical storm passing through the area for the weekend.

But whether the game is played or not, that will not stop the Cavaliers from being ready to play.

“Football is a outdoor sport,” Knight said. “We will be prepared for the game if it rains. Both teams will have to deal with the weather if the game is played, so we have to stay focused.”
Last year, the Cavaliers finished 3-9. This year, they expect things to be different. Knight says the first order of business is to score more points. Out of the 11 games the Cavaliers played last year, they scored more than 25 points only once.

“We didn’t score enough last year,” Knight said. “We have to score more points this year.”

Wilson took the win in last year’s meeting, 16-23. After Wilson jumped out to a 21-0 lead, Lakeland fought its way back, but lost. The Cavaliers want to get off to a good start Friday and control the tempo throughout the game.

“It is very important to get off to a good start being on the road,” Knight said. “We want to play fast, smart and physical. Not only that, protect the football and create turnovers.”

Lakeland will continue to get contributions from Tyquan Holloman and Alajuwun Langston. Holloman is a sophomore and is in his second year starting under center for the Cavaliers. Knight feels Holloman has built his confidence over the year and knows his playbook well.

Senior offensive and defensive lineman Garrett Whitley is also expected to make an impact over the season. Whitley is excited for the season and feels his team can compete with anyone.

“I know our team can play with anyone,” Whitley said. “Most of us have been working hard since last August. It will show this year I believe in my brothers.”

After a big 63-0 win last week, the Warriors will have a bigger task on their hands this week. The game may be in danger due to severe weather, but coach David Coccoli wont let that change the team’s preparation or focus.

“It’s up in the air right now,” Coccoli. “But we won’t let that affect us. We will still prepare and be ready to go regardless.”

Oscar Smith comes to town 0-1 after a loss last week and will be looking to bounce back. Coach Coccoli is excited for the opportunity and has liked how his team prepared this week.

“The kids are excited,” Coccoli said. “We are looking at what we did last week and got better in some areas.”

Oscar Smith is one of the premier programs in the area. The Warriors are ready to give their best effort and will have an extra motivation to play up to their competition. Coccoli wants his team to be focused, but knows this game gives his players a chance to be seen.

“Our goal is to get our guys into college,” Coccoli said. “Everyone wants to know what you can do against the best. There’s no bigger stage than playing against them.”

“We want to be more balanced,” said Coccoli. “That’s what we are trying to achieve on offense — have a balance of both rushing and passing.”