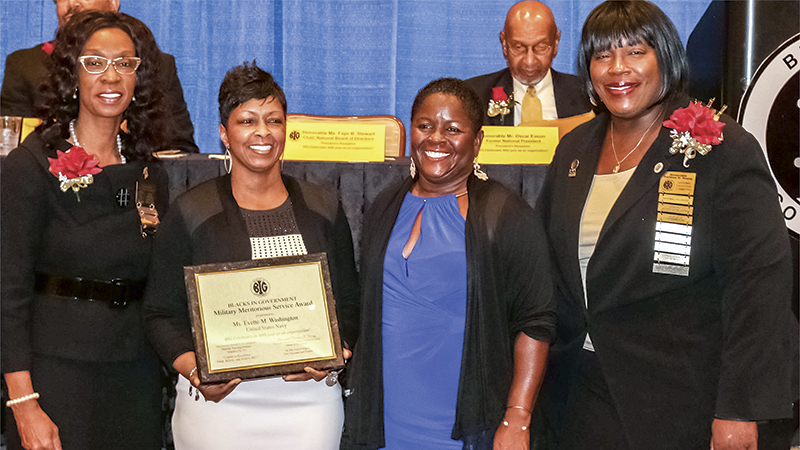 From left, B. Faye Stewart, Evette Washington, Denise Roberts and The Honorable Darlene Young are pictured at an awards ceremony in which Washington, an employee of the Naval Information Forces command in Suffolk, was honored with one of the annual Blacks In Government Military Meritorious Service Awards.
Robert Fluegel/U.S. Navy

Evette M. Washington of Naval Information Forces in Suffolk is one of this year’s annual Blacks In Government Military Meritorious Service Award winners. She was honored during a reception held in Atlantic City, N.J., on Aug. 23.

“Totally surprised and happy,” said Washington, a procurement analyst with NAVIFOR, expressing how honored she was to receive this award.

“I’m mostly a behind-the-scenes person. I didn’t really understand the magnitude of this award until I attended the event. I mean, I knew it was important, but not to this extent. What an honor it was to see so many people at this event who believe and support BIG’s mission, purpose, and goals!”

BIG was established in 1975 and incorporated as a nonprofit organization under the District of Columbia jurisdiction in 1976 by a small group of African-Americans at the Public Health Services, which is a part of the Department of Health, Education and Welfare in Rockville, Md.

BIG has been a national response to the need for African-Americans in public service to organize around issues of mutual concern and to use their collective strength to confront workplace and community issues.

BIG’s goals are to promote equity in all aspects of American life, excellence in public service and opportunity for all Americans.

The organization was viewed as essential to the black civil service employee, based on a wide assortment of racially motivated problems faced by the HEW black employees in Rockville.

After the umbrella organization was perceived to address the problems only at the federal level, it was soon determined that state, county, and municipal black employees were faced with the same general type of employment problems.

The Military Meritorious Service Award was first implemented in 2005 within the Department of Defense through the Office of Diversity, Management and Equal Opportunity. As of 2015, BIG has taken the role on behalf of the defense department of issuing this award.

“I nominated Evette, because her strong work ethic and zeal to get the job done were outstanding,” said Denise Roberts, director of contracts and acquisitions management for NAVIFOR and Washington’s supervisor.

“Her volunteer work and love for people are impressive. She indeed is an up-and-coming leader within the government. I’m proud to have her as part of NAVIFOR CAM team.”

According to Roberts, Washington made extraordinary contributions to the Navy and the advancement of BIG. She has the responsibility, accountability and integrity of fulfilling her role as the sole procurement analyst within the CAM Office, accomplishing her duties with exemplary results.

Similarly, she has excelled in academics by earning a Master of Business Administration with a concentration in finance, all while working full-time and being involved with multiple community outreach programs.

She understands mission needs and is an innovative leader who is driving change to manage costs and influence a more efficient and effective way in how NAVIFOR procures products and services from the private sector.

“Evette Washington is a dedicated and hard-working team player within NAVIFOR,” said Mark Kosnik, NAVIFOR’s deputy commander. “We are so very proud to have someone at this command with a can-do attitude, exemplary work ethic and the integrity that contributes so much to NAVIFOR’s mission as the Navy’s Information Warfare TYCOM.”

Starting her civilian government career in 1988 as a file clerk with the Internal Revenue Service in California, Washington is a native of Lewes, Delaware and was raised in Prince George’s County, Md.

For the majority of her career, she has worked within law enforcement, performing administrative and paraprofessional duties. She even volunteered for Girl Scouts as a co-leader. She currently resides in Portsmouth.

“I want others to know that if you work hard, set one’s mind on reaching his/her goals, all things are possible,” Washington said.

“I started in federal government as a GS-3 and I would have never thought I would have made it this far. I continue to remind myself that destiny continues to knock at my door as long as I am willing to do the work.”

Church to host fundraiser for pastor

Pastor Greg Ryan of Oakland Christian Church was diagnosed with acute myeloid leukemia while on vacation in Hawaii in... read more