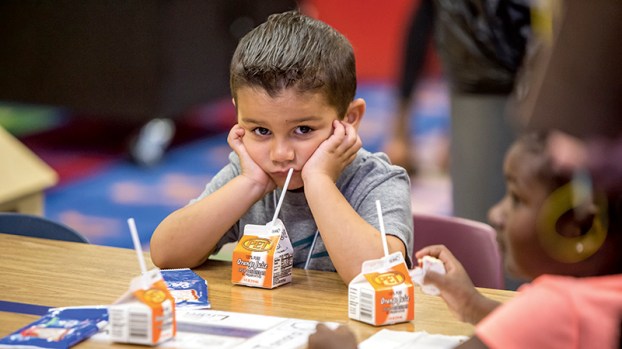 Liam Jones, an Early Start student at Elephant’s Fork Elementary School, struggles to contain his excitement about the first day of school.

Students head back to school

By Sterling Giles and Res Spears

The doors at Elephant’s Fork Elementary School opened at 9:05 a.m. on Tuesday, but parents had begun lining up on the covered sidewalk there much earlier.

As they noticed teaching assistant Norma Williams, some of the children filing past her smiled and ran up for a big hug before heading inside.

Waving at an arriving boy who gave her an excited, toothless grin, Williams, who has been “doing the front circle” on the first day of school for the past five years, said, “I know a lot of these babies.”

In a classroom along a colorfully decorated hallway inside the school, teaching assistant Denise Sherrod was talking to a couple of mothers. Their children would be learning in the blended-classroom environment of Early Start, where Sherrod helps a team of teachers.

The children, like their counterparts all around the school, had filed through the cafeteria for breakfast, which they’d carefully carried back to their classrooms on foam plates — milk or orange juice precariously balanced atop toaster pastries or some other breakfast item they’d been allowed to choose on their own.

On one side of the room, a boy excitedly engaged a reporter about his expectations — “My momma said I’ll do AWESOME in school,” 4-year-old Ahmari Hawkins said — while on the other side, another boy was softly crying.

Once things settled down, the crying would stop, Sherrod said.

“But then they’ll come back tomorrow, and there’ll be the same tears,” she added.

As expected, there was a range of emotions among the students, but teachers were nervous as well. 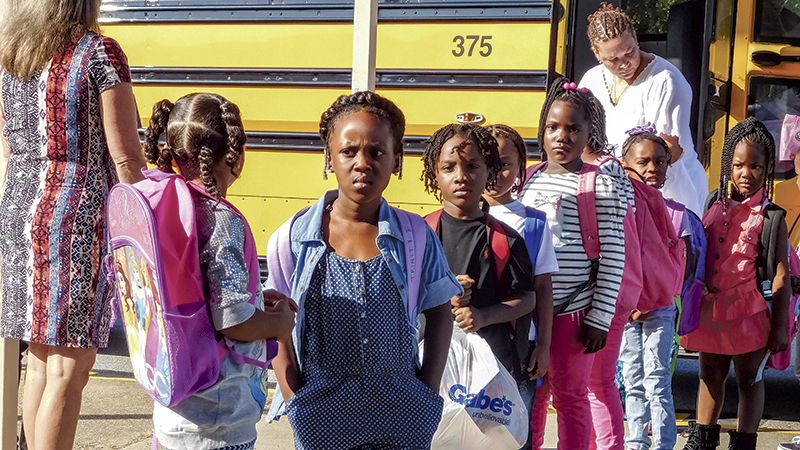 A group of Driver Elementary School students files off the bus.

“The first day of school is particularly exciting and nerve-racking as a new teacher,” said Lori Mounie, principal at Booker T. Washington Elementary. “I had one email last night expressing her nervousness. She actually referred to me as ‘Momma Mounie.’ I have promised to take care of her since I now have an empty nest. I assured her we are all nervous including myself and this is my 30th year!”

Mounie is one of several principals in a new place this year. She moved to Booker T. Washington from Kilby Shores Elementary School, being replaced at Kilby Shores by Lorri Banks.

But personnel changes aren’t the only ones to be found in Suffolk Public Schools this year.

Over the summer, Florence Bowser Elementary School closed for demolition. By May 2018, the site will be home to a new, larger school of the same name.

In the meantime, all 225 Florence Bowser students were integrated with Driver Elementary. As of last week, Driver’s enrollment totaled 560 students, according to the school’s principal, Melodie Griffin.

Griffin said the first day went along without any major disruptions.

“We knew it was going to be a busy day,” she said. “But pretty much everything went according to plan.”

The school required parents to sign in and to wear visitor tags for safety precautions.

“We wanted to make sure we had everyone accounted for,” Griffin said.

The school has implemented new routines to cater to the safety of the younger Florence Bowser students, according to Griffin. However, combining the two school populations has been exciting for faculty and parents.

“There is an excitement that we are in one place,” Griffin said.

The first day went fairly smoothly for the city’s schools. However, there were issues with some late buses.

Currently, there are seven driver vacancies, which have to be covered by the current drivers. Additionally, buses are expected to be late returning home for the first two weeks as faculty make sure students are on the correct buses, according to Bethanne Bradshaw, public information officer for Suffolk Public Schools.

“We ask parents to be patient and to know that their child’s safety is a top priority,” said Keba Baldwin, director of transportation for the city’s public schools.

The transportation department has implemented a new GPS system to keep track of the buses in real time, according to Bradshaw. This helps notify schools about the buses’ expected arrival times.

To submit a form with transportation-related questions or concerns, and to find additional back-to-school information, visit www.spsk12.net/back-to-school-central.

Police are seeking the identity of this man, who robbed a Family Dollar store on Monday. Suffolk police are... read more