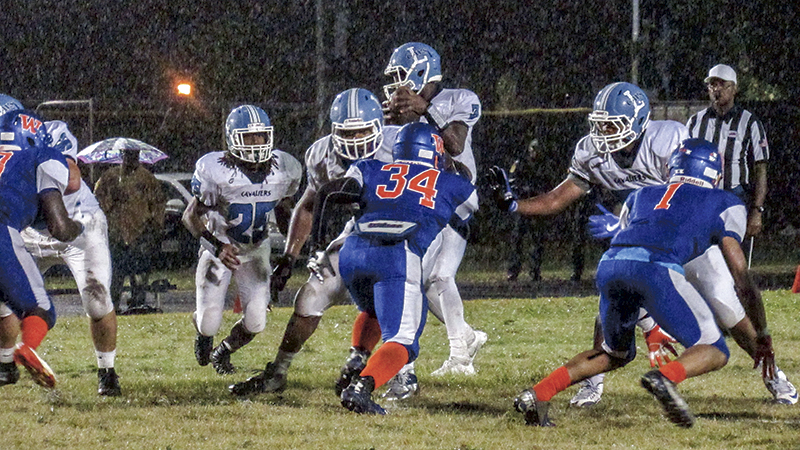 The Cavaliers’ Damontra Milteer prepares for a handoff from quarterback Tyquan Holloman. Milteer ran for 202 yards against Wilson in week two.

During week one of the season, the Saints struggled against Norfolk Christian. A 30-6 home opener loss was not ideal for a team that just won the state championship last year.

The Saints have an opportunity to bounce back, as they will again be at home this week against Christchurch.

An issue in the game against Norfolk Christian was the team’s conditioning. Biehl was not happy with where it was that first game, so over the bye week, NSA made sure to focus on improving their stamina and endurance.

The goal is for everyone to be able to play a full, effective 48 minutes.

“Our energy level has to be high throughout the game,” senior Keshaun Moore said. “We can’t get tired as the game goes on like we did against Norfolk Christian.”

Christchurch will be starting their season against NSA. The Saints’ focus defensively will be to stop the run due to the offense that Christchurch runs.

“They play a tough brand of football,” Biehl said. “They want to run the ball first with their power running attack, so we have to be prepared to stop the run.”

This will be the second of three home games in a row for NSA. Biehl and his team want to take pride in defending their home field.

“We have to seize this opportunity in front of us to protect our home field like I know we can,” Biehl said. “There has to be an added element of pride taken when you play at home.”

The Saints will need to do a better job at taking care of the ball after having five turnovers in their first game. Out of the base plays that NSA runs, they want Christchurch to have to defend every part of the field.

If the Saints lose to Christchurch, it would be a rough start to their season, which may even add more pressure. Moore is preparing his team to take it one game at a time and not focus on outside expectations.

“This week we are more focused because we know the first game is not how we play,” Moore said. “I tell the guys block out all the extra noise we hear because everyone is doubting us.”

NSA at home against Christchurch at 7 p.m. Sept. 9.

After a 44-26 win against Smithfield on opening weekend, King’s Fork will be on the road against Hickory. The Bulldogs are coming off their bye week and are focused on improving to 2-0. Over the bye week, the Bulldogs focused mainly on their tempo. Coach Scottie Littles wants the Bulldogs to be a fast team on both sides of the ball.

Hickory is 1-0 just like the Bulldogs, and Littles knows if they want to be 2-0 it starts with controlling Hickory’s offense.

“They run a system that can cause many headaches,” Littles said. “With their scheme and personnel, we have to stop the run. They are a big team up front, so we have to be aggressive at the point of attack. We can use our speed on defense to our advantage.”

Friday night will be the Bulldogs’ first road game of the season. A key for the Bulldogs to get a road win is for them to remain as a team. Littles knows that every play won’t go right, but it is of particular importance to stay as a team on the road.

“Hickory has a great fan base down there,” Littles said. “We have to remain teammates and stay in each other’s corner. Everybody has to do their job. On the road it is important, we execute even more than we would if we are home.”

In week one, running back Darran Butts and quarterback Justin German combined for six touchdowns. This week, it will be substantial for those two to continue playing off of one another as they did against Smithfield.

“Darran and I can trouble a defense in so many ways,” German said. “Teams will have to game plan to stop both of us, and we play well off of each other. However, what we do isn’t possible without our offensive line. They block their butts off for us.”

Last weekend, the Cavaliers opened the season with a 28-8 victory against Wilson High School on the road. This week will be their home opener against Western Branch. The Cavs plan to feed on their home crowd’s energy to push forward to 2-0.

“It is going to be loud Friday night,” coach Kevin Knight said. “There is nothing like being at home in front of your home crowd and feeding off that energy. The Suffolk community is ready to come out and show us support.”

Every day the Cavs go over how important it is to take care of home field. Last year they didn’t do a great job of that, only winning three games on the year. Preparation week has gone well for the Cavs, and they are excited about getting back on the field Friday night.

“We are excited to have another opportunity to play,” Knight said. “Western Branch is a good team. If we continue to lean on our run game, that’s going to open up things for the pass.”

Special teams have been a point of emphasis for Lakeland, due to errors made in the Wilson game. The Cavs could have possibly shut out Wilson if it were not for a third quarter kick return that Wilson scored on. On many punt returns, the Cavs had a hard time holding on to the ball, although that may had been due to weather during the game, Lakeland still wanted to focus on that this week.

Starting off 2-0 will be a huge confidence booster for the Cavaliers. Last year, the Cavs were 0-3 before getting their first win of the season.

“If we go 2-0 that would be a heck of a start for our program,” Knight said. “Us beating them would be huge for our guys and for our confidence going forward.”

Western Branch is 0-1 on the year but finished fourth in Southeastern District last year with a 6-4 record. Offensively they have different things that they do. They might come out in a spread formation and at times Wing-T formation as well. The Cavs are prepared for whatever they feel Great Bridge will run.

“We have to come out and stay discipline and play our game,” senior Alajuwun Langston said. “We are going to let the game come to us. Friday will be an excellent opportunity for us to build.”