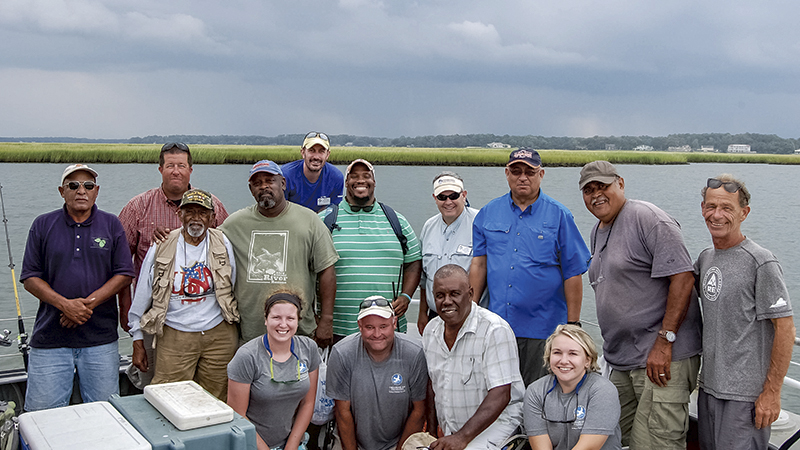 A Suffolk agricultural extension agent was among the eight agents, professors and farmers on a boating trip hosted by the Chesapeake Bay Foundation last Thursday.

“The trip allowed us to see how we can work together to address problems affecting the Chesapeake Bay,” said Marcus Williams, the city’s agricultural and natural resources extension agent.

In the past, the Chesapeake Bay Foundation hosted a similar program for farmers. However, it catered primarily to those from the Shenandoah Valley region. The current trip welcomed agricultural representatives from southeastern Virginia, including Virginia Beach, Surry County, Suffolk and Virginia State University current and former professors.

The university has a unique historical tie to the agriculture field.

Since 1862, Virginia Tech and Virginia State are the only schools in the commonwealth to reap the benefits of the Morrill Acts.

The first act in 1862 established at least one college in every state to have access to agricultural resources and land for educational purposes. The act awarded each eligible state 30,000 acres of federal land and grants. In total, more than 17.4 million acres and $7.55 million in grants were allotted, according to the program’s website.

Virginia Tech was the first of the two schools to benefit from the act.

In 1890, the second Morrill Act designated land grants to historically black colleges and universities. To date, Virginia State is among the 19 universities nationwide deemed an 1890 land-grant institution.

During the trip, the boat traveled along the mouth of the Chesapeake Bay off of Virginia Beach. While onboard, participants discussed agriculture management strategies and fished in the bay.

“We have to work on being mindful that we do live in a watershed and we have to be mindful of the fertilizer we use,” Williams said. “They flow into the Chesapeake Bay, which is a source we eat out of.”

Chris Moore, the foundation’s Virginia senior scientist, said the trip appeals to smaller farmers who at times can be neglected.

“We may not get the assistance that larger farmers get,” Moore said. “But, we are working on things we can do in the future together. We are making better connections and learning issues farmers are facing.”

Moving forward, the foundation plans to continue providing boating trips for local students and faculty to learn more about the bay. Also, beginning at the end of September, the foundation will start a new education program at its Brock Environmental Center.

Kenny Fletcher, the foundation’s Virginia communications coordinator, said the program was started in response to an overwhelming demand from the community.

During the program, students will canoe along the Lynnhaven River and hike the trails surrounding the facility. Also, participants will have the opportunity to study the marine wildlife in the area.

To date, more than 30 groups from two Virginia Beach schools have registered for the program. The program will run from the end of September through early December. The spring session will begin around March.

Registration for all the foundation’s spring programs begins in October.

“We are glad to provide an opportunity for Hampton Roads students to get in the water,” Fletcher said.

In addition, this fall, Williams hopes to introduce hydroclimate systems at local schools to teach students about the effect agricultural practices have on the waterways.