Making lemonade out of lemons

Chandra Moyer wants to make sure no foster parents ever have to face the nightmare she and her husband did in Hawaii years ago, when two foster children they were trying to adopt were taken away by social services. 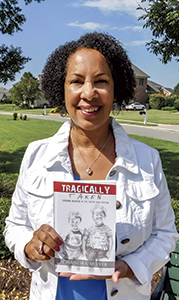 Chandra Moyer and her husband, T.P., had their two foster children taken from them. Chandra decided to write about her experience and suggested foster care reform in her book, “Tragically Taken.”

In 2003, Chandra Moyer originally wrote about her experience in her book, “A Voice for My Silent Lambs.” In August of this year, she released an updated version of the book under the title, “Tragically Taken.”

At the time, the Moyer family was living in Hawaii. Chandra and T.P. Moyer were in the process of adopting two biracial siblings, a 3-year-old girl and 2-year-old boy. The couple also had two biological children of their own, Ashley and Aaron.

Chandra Moyer said the family had the foster children for only three months.

The two children clicked instantly with the family.

“We brought them permanently into our hearts,” she said.

After a few weeks, Moyer said, she began to notice some strange behavioral changes in the girl.

She decided to take her to a private psychologist but was cautioned by one of the state’s social workers, she recalled recently. A state psychologist claimed the girl did not show any unusual behavioral problems.

But Moyer decided to receive a second opinion, anyway, and the private psychologist said the girl was suffering from earlier sexual abuse trauma.

What happened next would impact the Moyer family for the rest of their lives.

Chandra Moyer said the social worker threatened to have the children moved due to her decision to go to the private psychologist.

A few days later, the Moyers were awakened when social workers showed up and demanded custody of the foster children.

Moyer was forced to comply but made sure the children were able to say one final goodbye to their brother and sister.

Aaron recalled seeing his mother and his two foster siblings show up at his school during recess.

However, in the years to follow, the family decided to adopt again. But this time, they went through a private adoption agency.

Micah, the adopted child, came home to the family at just 3 days old.

“That was healing,” Aaron said. “It was like having a little brother again.”

Despite the traumatic experience, Chandra Moyer refused to feel sorry for herself and decided to take action.

“This was nothing I dreamed about; it chose me,” she said. “But seeing this injustice — I couldn’t live with myself.”

She met with state legislators, attended community rallies and interviewed with several news outlets to tell her story and to raise awareness about the nation’s flawed social work system.

“I’ve become a voice for the voiceless,” she said. “Who is going to speak for them?”

T.P. Moyer recalled his wife recording her conversations and experiences. He joked that she should write a book about the experience.

She took his suggestion to heart and published “A Voice for Silent Lambs.” In addition to describing her experience in detail, she also addressed a need for foster care reform and the effect of human trafficking on foster care.

“I’m hoping I can turn tragedy into positive change,” Chandra said. “Be the change you want to see.”

On Oct. 22, Chandra will be a part of the Fall Regional Author Showcase at the Barnes and Noble on Greenbrier Parkway in Chesapeake. She is also finalizing a book signing at the Harbour View Riverfront community clubhouse on Oct. 27.