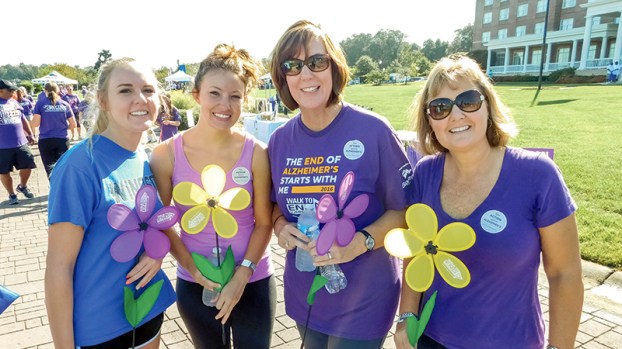 From left, Emma Wyatt, Erin Euimoye, Alisa Porter and Laurie Phillips were among the participants in this year’s Western Tidewater Walk to End Alzheimer’s.

The flower windmills were offered in a variety of colors, which signified how the disease had personally affected the participants.

On site were tents from the Alzheimer’s Association, local organizations and community sponsors. The event began with remarks from members of the association, retired WVEC reporter Joe Flanagan and Mayor Linda Johnson, who served as this year’s honorary chair.

“Alzheimer’s is relentless,” Flanagan said. “But then again so are we. The end of Alzheimer’s begins with us.”

Johnson held an orange flower pinwheel in her hand as she addressed the crowd. The pinwheel signified that the disease had not directly affected her. However, she still advocated for the cause.

Last year, the association exceeded its goal of $40,000 by more than $20,000, according to Gino Colombara, executive director of the Alzheimer’s Association Southeastern Virginia chapter.

This year’s goal is $72,000 and Colombara believes the goal will be surpassed again.

Colombara has been an advocate for Alzheimer’s research for more than 22 years. He was inspired to get involved after his father suffered and died from the disease.

“We are creating a community for those navigating through the course of the disease,” Colombara said.

He said the purpose of the walk was for awareness building, to raise funds for research and for the sake of the community.

“It’s about the people, so they know they’re not alone,” he said.

Colombara said there would be other Alzheimer’s awareness walks all over the region in the approaching months. Donations could be made to the association until the end of November by visiting www.alz.org.

The Sierra Club will hold a candidate forum later this month to examine the stances of City Council candidates on... read more