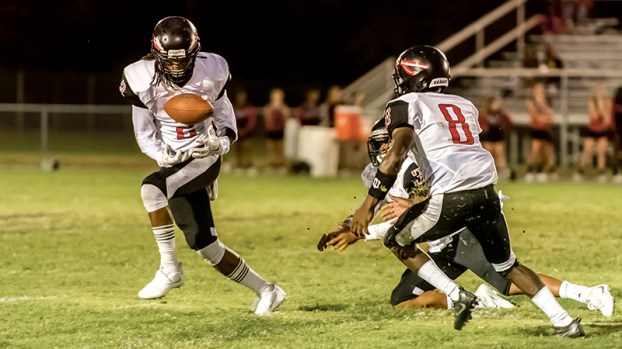 Nansemond River High School junior Quincy Gregg gets the ball during a disappointing loss to Deep Creek on Friday. The Warriors are now 1-2 for the season. Sarah Murphy/Beansprout Photography

After controlling the first half, Nansemond River High School allowed 22 second-half points on Friday in a 32-14 loss at Deep Creek.

Following the Warriors’ first football game after the bye week, they are now 1-2.

The Warriors didn’t show any signs of bye-week rust in the first quarter, as they scored after just eight plays on a run by Anthony Oliphant.

But after massing a 14-0 halftime lead, NRHS was unable to score another point.

“We can’t take our foot off of the gas after we have a good start,” quarterback DyQuan McGhee said. “As an offense, we need to continue to move the ball and get going so our defense won’t be worn out because of us going three and out.”

The game proved costly to the NRHS defense.

“On defense, we just got worn down,” coach David Coccoli said. “We lost three more guys (including Gerald Stringer) in the second half, and we had to do some adjusting. Deep Creek did what they were supposed to do. I give credit to them.”

McGhee completed five of 13 pass attempts for 57 yards and three interceptions. He also rushed 16 times for 67 yards. Oliphant followed with 13 carries for 54 yards.

Jevon Waller has been missed offensively, as he had helped ease pressure on McGhee.

“It’s kind of hard being on the sideline when I want to be out there helping my team,” Waller said. “It’s hard to watch us lose the way we did, and I couldn’t do anything about it.”

The Warriors have depth at running back, and the rotation gives a defense a different look each possession. McGhee said he has to play better for his team to get back to having success.

“Every day is important to me in my progression,” McGhee said. “We have a lot of work to do as a team. However, I believe in my coaches to continue to coach me up. I’m new to the position, so I have to get a feel for the game and move on from there.”

“We need to go back to the drawing board from players to coaches,” Coccoli said. “We have an improving Hickory team coming up, so we have to be prepared to make adjustments.”

Nansemond River will be at Hickory High school at 7 p.m. on Sept. 23.