The glow from Suffolk 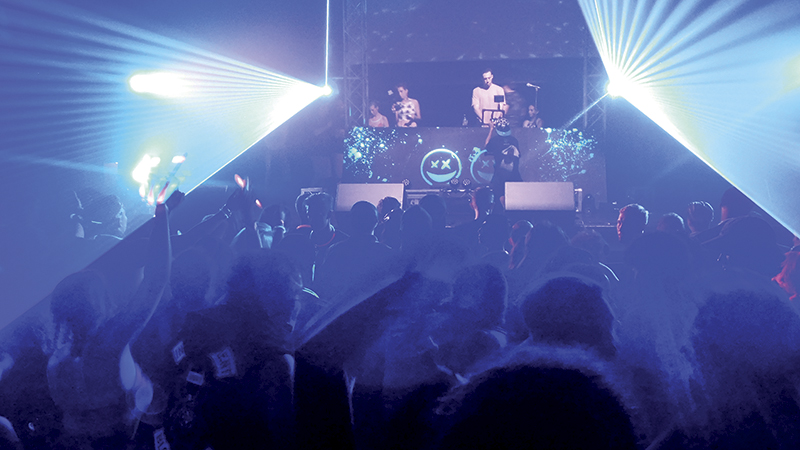 The party gets started at the NorVa in late August.

The calm summer evening was a counterpoint to the frenzy inside Norfolk’s NorVa theater as preparations were under way for The Jolley Brothers’ Glow Show.

On stage, a young, blond-haired man barked orders to the staff about the precise angles needed for the stage lights. A few feet away, his twin brother supervised a discussion about whether or it would be safe for the bikini- and fishnet tight-wearing dancers to use a pole in their routine.

In the end, the pole was removed as a safety precaution. But that decision changed little about the provocative dance routines that would serve as a focal point for the show, the most recent in a series of events produced by Matt and Chris Jolley, two King’s Fork High

School alumni who are trying to make a living in the world of hip-hop and EDM, electronic dance music. 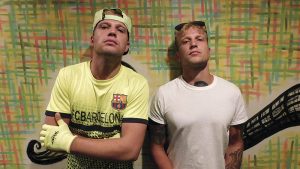 Chris Jolley, left, and his twin brother, Matt, await the start of their show at the NorVa on Aug. 27. The brothers are King’s Fork High School graduates.

Their August event at the NorVa was billed as the brothers’ biggest Glow Show ever, as DJ 4B would serve as one of the headliners. The disc jockey recently signed with Skrillex, one of the biggest names in the electronic dance music scene.

The show began just after 10 p.m. The line to get into the venue stretched along Monticello Avenue, with teens and young adults chatting, checking their cellphones and preparing to dance to the heavy bass beat that characterizes this musical genre.

The Glow Show lived up to its name, as glow-painted dancers gyrated among spotlights and lasers, and the audience wore neon-colored glow rings, if, in some cases, not a whole lot else.

“It’s an electronic circus,” Matt Jolley said before the show.

During the show, an array of blue, crimson and green lights flashed in unison with the gritty, loud, electronic synths and bass. The crowd, sweating in the press of bodies, jerked and juked in time with the music. With each pulsating bass drop, the audience reacted with stale-faced head nods.

As each artist called for a response from the crowd, they were met with loud, resounding approval. 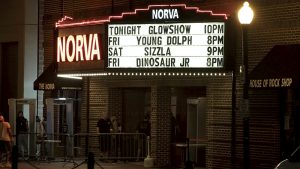 The NorVa theater in Norfolk was the venue for a Glow Show in late August. The event was produced by the Jolley Brothers, identical twins Matt and Chris Jolley, who are from Suffolk. (R.E. Spears III photo)

Who would have thought a set of twins from Suffolk could stir so much excitement at a nationally recognized venue?

“We are like the Black Eyed Peas, but more in-your-face,” Chris Jolley said.

The duo began making music at just 13 years of age. They are fans of all music genres but capitalized on combining the hip-hop and EDM genres to form their own unique style.

The brothers got their start by throwing massive house parties and shows in the country.

“We always bring out a diverse crowd,” Chris said. “We brought more people together. We are about good vibes and a good time.”

Within the last few years, the act has garnered national attention, though it hasn’t all been positive.

The brothers have worked alongside artists and producers such as Lex Luger and Lil Jon. However, in 2013, during the eighth season of America’s Got Talent, the Jolley Brothers were rejected by three of the four judges during auditions.

This did not slow down their momentum.

At one point, they sold out the NorVa three times in a row. On their website, the brothers say they are the first act from the Hampton Roads area to sell out the venue.

What makes them unique, they say, is that they seek to promote and integrate local artists into their shows.

“We want to put on for the state that made us,” Matt said.

During their show at the NorVa, Luke “Farenhype” Sullivan and Meaghan Rose, who have both worked with the twins for the last two to three years, offered nothing but praise.

“There is mutual love,” Rose said. “They bring in a lot of local everything and take elements from where they come from.”

Matt Jolley said he and his brother have remained independent, because they want to have control over their art.

“We were tired of promoters giving us dumb time slots,” Matt said. “We wanted to have a say with our music.”

The Jolleys have promoted several of their own shows, even coming out of pocket to do so, on occasion.

Despite the duo’s growing popularity in recent years, they have continued to possess the same work ethic and passion for their craft.

“They’re literally all about the music,” Rose said.