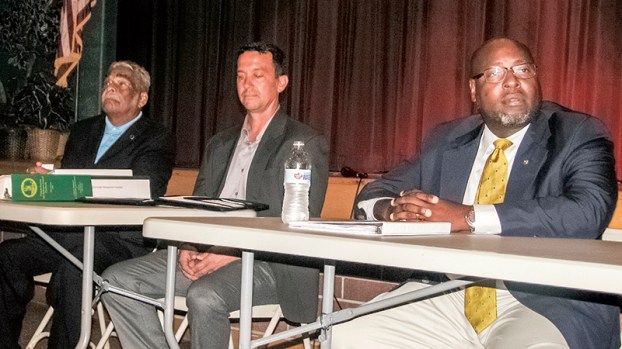 Three candidates for Suffolk City Council talked about a natural gas pipeline, green infrastructure, renewable energy, water quality and other environmental topics during a forum sponsored by the Sierra Club on Wednesday.

Brian Bass and Kerry Holmes, who are running for mayor, and Councilman Curtis Milteer, the incumbent in the Whaleyville Borough, attended the forum to answer questions from the audience of about 60 people at King’s Fork Middle School.

Randie Trestrail, a member of the executive committee of York River Group of the Sierra Club, said the group was disappointed with the turnout from the candidates. All 13 who are running for mayor or City Council were invited, she said.

“We are a little disappointed that more of them aren’t here,” Trestrail told the audience on Wednesday. She encouraged the audience to ask the absentees about environmental issues when they see them around town.

Only one additional candidate, Ben Fitzgerald, who is running for the Nansemond Borough, completed the questionnaire sent to candidates.

Mayor Linda T. Johnson said she had city business in Richmond but sent a letter to be read at the forum, in which she touted accomplishments such as the first LEED-certified building in Suffolk — the Health and Human Services building — and the recent formation of the Green Infrastructure Advisory Committee.

The candidates who did attend went on the offensive against those absent.

“I think it’s a forfeit,” mayoral candidate Brian Bass said. “If one team doesn’t show up, who wins? The team that’s there.”

Trestrail said she was pleased that most of the audience was aware of the proposed Atlantic Coast Pipeline, which would run through Suffolk carrying natural gas.

Both mayoral candidates seemed wary at best about the prospect of the pipeline.

“There are some issues that need to be settled before we put this pipeline in place,” mayoral candidate Kerry Holmes said. “We need to be mindful of who is lobbying for this pipeline.” He encouraged voters to look at campaign finance reports and see who has backing from pipeline representatives.

Bass said he will protect landowners throughout the process but also hopes to seek sources of renewable energy, such as solar, first.
“They’re going to find enough landowners to connect the dots,” he said. “The sun’s going to shine a lot longer than any of us are going to be here.”

One place solar energy can be put to use is green schools. One audience member brought up the recent partnership between Western Branch High School and Dominion Virginia Power that installed solar panels on the school.

Holmes said not doing so in Suffolk — not even on two new schools under construction now — is due to a lack of planning.

“We have close to 20 adults that cannot plan for what we need as a city,” he said, referring to City Council and School Board. “I don’t believe Suffolk needs to be Chesapeake, but I believe there are lessons we can learn from other localities, and that’s one of them.”

Milteer said there has to be funding available to do new programs.

Bass said new, young leadership can come up with ways to get things done.

“Consider Mr. Holmes and myself your lead candidates,” he said.

Other audience members asked questions about the protection of the 100-foot buffer around bodies of water from development and the quality of the water in the Nansemond River, which go hand in hand.

“Exceptions will be the rarity, not the norm,” if he is elected, he said. “Political power can be wielded to make sure the departments do what they have to do.”

Bass said he also will push for the protection of the buffer.

Both mayoral candidates also said they are in favor of greater efforts to allow waterfront access to the Nansemond River.

Holmes said city leaders should work with Walmart, Lowe’s and other businesses on North Main Street with their backs to the river.

Bass said green infrastructure and waterfront access are important and that city leaders should work more closely with the U.S. Army Corps of Engineers to create good projects.

Trestrail said the Sierra Club was pleased with the questions from the audience. The group will release endorsements in a few days, she added.

A Suffolk native is receiving accolades for a film examining a central paradox of America’s founding fathers — how could... read more