Parade of Homes kicks off 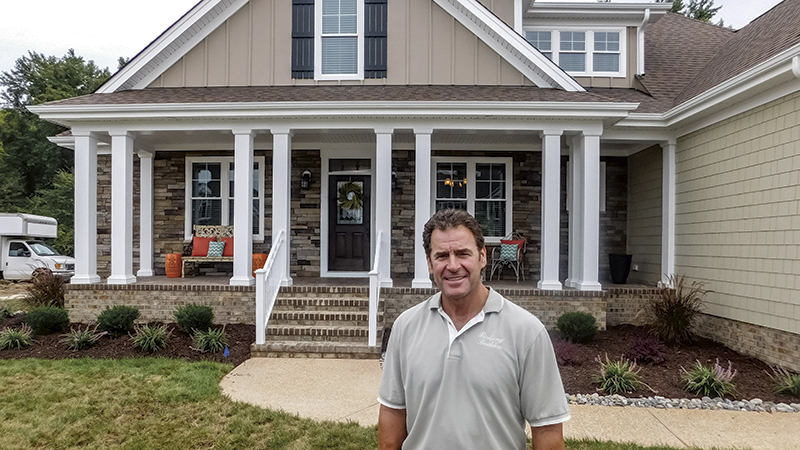 Billy Birdsong of Birdsong Builders LLC, stands in front of his showcase home along Founders Pointe’s new lakefront cul-de-sac community. The home will be one of eight showcased in this year’s Parade of Homes.

The homes in Founders Pointe’s new lakefront cul-de-sac opened with a slew of awards on Friday evening at the Parade of Homes preview gala.

In the spring, eight builders were designated to build homes along Richmond Way in the Carrolloton subdivision. They hurried to finish by late this week for judging.

The heavy rainfall last week proved to be a scheduling nightmare for many of the builders. However, some prepared in advance.

“I put more effort on the front side to finish a little earlier,” said Billy Birdsong of Birdsong Builders LLC.

On Thursday, judges selected by the Peninsula Housing and Builders Association, which is hosting the Parade event, viewed and critiqued the homes. The properties were judged in eight categories, including best kitchen, best interior design and best in show.

“We don’t just build for the awards; we build for our customers,” he said.

To date, half of the homes have been sold, according to Mark Edwards, senior vice president and broker at East West Realty.

In addition, the E.R. Lenz, Ore and Sasser homes were being utilized for humanitarian purposes.

Two rooms in the Sasser and Ore homes were dedicated to two children battling cancer. Also, according to the builder, a portion of E.R. Lenz home’s selling price will be donated to Habitat for Humanity.

The homes will be on display as a part the Parade of Homes showcase, which runs through Oct. 16. There will be a variety of community events for all to enjoy including a family fun day, wine tastings and a 5K and more.

“It looks like it’s going to be a successful show,” Edwards said.

East West Partners, a regional community developer for more than 25 years, built Founders Pointe in 2005. The community is East West’s third in Isle of Wight County, including Gatling Pointe and Eagle Harbor.

This year’s Parade of Homes will be the fifth major home showcase for East West Partners. In 2010, the Tidewater Builders Association hosted Homearama at Founders Pointe, attracting 30,000 visitors. East West also hosted two other Homearama events at The Riverfront in 2001 and 2011.