McGhee is the Warriors’ quarterback. Though this is his first year playing in that position at the varsity level, he is embracing the opportunity and the growth. 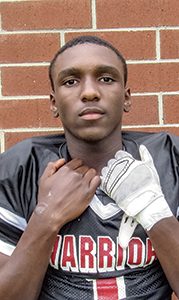 McGhee said he was honored to have been considered for Player-of-the-Week honors, but he gives credit to others for his success.

“It’s great to be acknowledged for doing what I was coached to do,” he said. “Without my team, I wouldn’t have been on the poll. I give credit to my team.”

His teammates were just as excited as he was over his nomination, which speaks to McGhee’s character as a player and as a person. His teammates seem to value him as an athlete and as the team leader he is becoming.

“Dy’Quan is a great athlete and leader,” teammate Henry Moreno said. “We were all excited when we heard he was nominated, and it tops everything off that he won. He has been working really hard this year and has earned his shine.”

“He’s an extremely determined person,” Warrior JeVon Waller said. “He’s getting better every day, and everyone on the team looks up to him. We can always expect big things from him, and he’s an even better person off the field.”

McGhee has big goals for himself and his team. Individually he wants to rush and pass for 1000 yards. His team goal is to make Warriors history by making a big playoff run with his team.

He is humble in spirit but at the same time confident in his skills and his goals.

“I feel like whoever is in front of me or on the opposing team isn’t going to stop me,” McGhee said. “I want to be the best quarterback in the city of Suffolk.”

McGhee’s family has a history in sports. His father played three sports, including football, ad his mother ran track. Both of his younger brothers are involved in sports, as well. His family and friends help keep him motivated.

McGhee wears a No. 1 on his jersey, but it hasn’t always been so. He used to wear No. 7, but because of the death of his best friend, he changed his number in hopes for a new beginning.

“I just figured it was time for a change,” he said. “The No. 1 stands for a new start of a chapter in my life.”

At the quarterback position, it is important to be leader, meaning at all times a player must keep his composure. McGhee has accepted that challenge.

“My mom always told me to be a leader and not a follower,” he said. “I think about that every day. I have to make sure I lead my team the best way I can. I stay uplifted and ready, because if my team’s sees me down, then they will be too.”