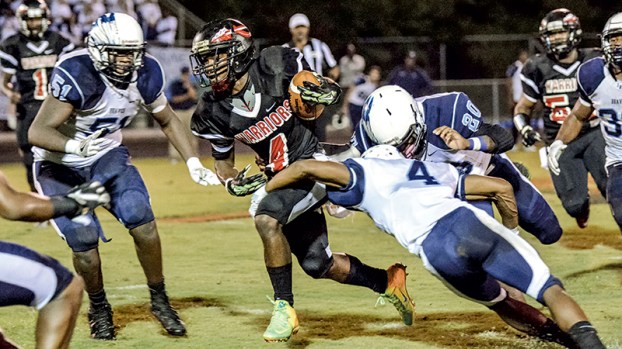 The Warriors got arguably their biggest win of the season so far, taking care of the Braves to move to 3-2 on the year.

After scoring on its first drive, Indian River was unable to put any points on the board for the rest of the game.

“I’m very pleased with the kids’ effort,” Warriors coach David Coccoli said. “I’m proud of the way they responded. We scored 30 unanswered points, and our defensive effort was great.”

Going into Friday night’s game, Coccoli had said his team needed to do its best to stop the Braves’ skill players, and that’s just what they did. Nansemond River allowed only 108 total yards on the game.

“The way we played defensively was great,” Coccoli said. “Their effort out there speaks volumes. We had a good game in all three phases.”

This year’s NRHS senior class had never defeated Indian River, so Friday’s night game had added significance for the upperclassmen.

“This game meant a whole lot,” offensive standout JeVon Waller said. “Not only just for the seniors, but the entire team. No one really thought we would win that game, and to pull it off was huge for us.”

“We were the underdogs, and we proved everybody wrong,” senior DyQuan McGhee said. “It feels great to get that win and prove everyone wrong.”

Next for the Warriors is a game at Western Branch, another team the senior class has not beaten, at 7 p.m. Friday.

Nansemond-Suffolk Academy’s football team squeaked past St. Anne’s Belfield on Friday to move to 2-3 for the season. The Saints’... read more