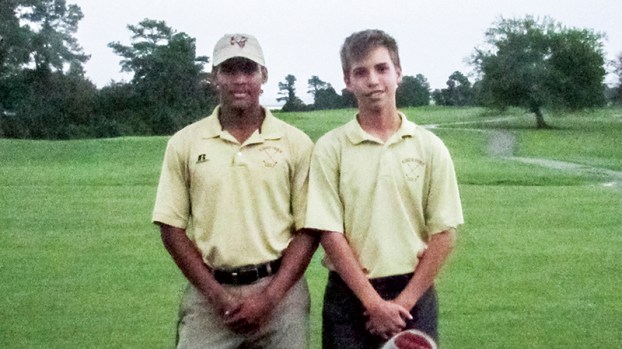 Tyler Branch and Jacob Meece had scores of 96 and 117 respectively at the regional golf tournament in Toano Virginia. Neither player qualified for the state tournament, as the Bulldogs’ season ends.

The King’s Fork High School golf team recently went from placing third as a team in their conference tournament last week to having two players qualify for regionals at Stonehouse Golf Course in Toano.

But despite strong efforts from both Branch and Meece, the Bulldogs’ golf season came to an end, as neither player qualified for the state tournament. Branch shot 96, while Meece shot 117 — both about a stroke difference from their averages.

“They played well,” coach Calvin Mitchell said. “The course was long and challenging. Considering that was their first time seeing that course, they played well.”

Branch felt he performed well for what the Stonehouse course presented. Both players had the goal of making states, but instead, they are satisfied along with Mitchell with how the season went overall.

A lot of progress was made from the beginning of the season until the end.

“It was rough at the beginning, because most of our players were new,” Branch said. “They caught on quickly, and it made the season lots of fun.”

“They learned, and they got better, and that’s what it’s all about,” Mitchell said of the Bulldogs’ season. “I am very pleased with what the kids were able to accomplish. I’m proud of the progress Tyler made as a leader for this team. I’m also proud at how better of a player Jacob was from the beginning of the season to qualify for regionals.”

The biggest thing Mitchell was most impressed with this year is how well his team worked with each other. Each of his players genuinely wanted to help one another out, and all of them enjoyed each other’s company.

Next year, the Bulldogs expect to return five players from this year’s team. Branch and Meece will be the departing seniors. Mitchell believes that with the experience his players received this year, it will help them greatly for next season.

“I expect them to be improved players,” Mitchell said. “They got valuable competition golf under their belt as opposed to just playing golf for fun. I think we have some good kids with good attitudes coming in next year too. The future is bright for Bulldogs golf.”