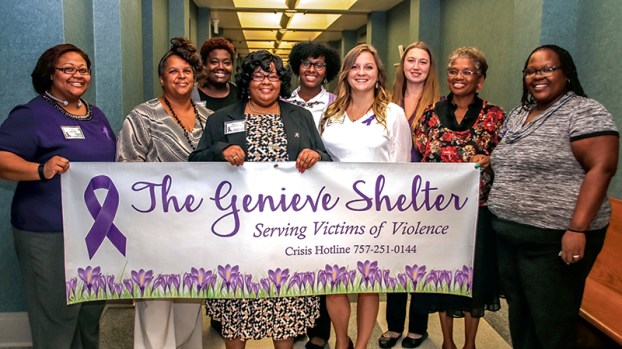 The Genieve Shelter was among four nonprofits involved in the announcement of a new regional hotline on Friday for victims of domestic violence, sexual assault and human trafficking.

The organizations teamed up to form the “Coordinated Crisis Response” hotline. The number, 251-0144, will serve all residents in the Hampton Roads area.

“Instead of competing with one another, we decided to collaborate together,” said Marleisa Montgomery, executive director at the Genieve Shelter.

The new 24-hour hotline helps eliminate this inconvenience and connects callers to the emergency shelters. Responders can also help orchestrate transportation to hospitals or police stations, if necessary.

Montgomery feels this will help callers “so they wouldn’t have to be re-victimized by telling their story over and over.”

The organizations expect to receive more than 20,000 calls within the next year.

On Monday evening, the Genieve Shelter hosted a vigil to honor the lives lost to domestic violence over the course of the year. Also, Mayor Linda T. Johnson, Commonwealth’s Attorney Phil Ferguson and other public officials gave remarks.

There are 20 people per minute, or 10 million per year, affected by physical domestic abuse, Ferguson said.

Last year, in Suffolk alone, about 1,500 calls pertained to a form of domestic violence. This was identified as one of the top 10 crimes called in, sitting at No. 7, according to Bennett.

The Genieve Shelter also honored community members and organizations with its “Heroes for Life” awards. They were being recognized for their volunteer services and contributions to the shelter.

“I didn’t even know I’d be here today to even tell my story,” one said. “Without the shelter’s help, I couldn’t get back on my feet.”

Montgomery was deeply impacted by the courage of the survivors.

“They were able to overcome and to empower other women to get out of their situations,” she said.

Montgomery also mentioned the shelter’s Dollar-A-Day program. For the month of October, the initiative calls for 6,500 individuals and organizations to donate $31 to cover the shelter’s mortgage costs and to sustain its children’s program.