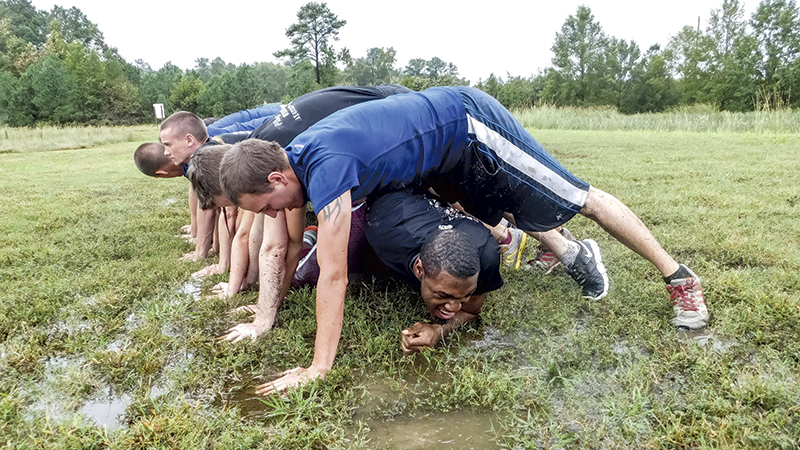 Most young adults spend their Saturday mornings sleeping in. However, a group of U.S. Marine Corps recruits spent their Saturday learning about the values of the military branch and engaged in challenging physical training.

The purpose of the program is to prepare recruits for boot camp.

“When they come from recruit training, they are 100 percent ready,” said Staff Sgt. Tellers Pollard, one of the recruiters at the U.S. Marine Corps Suffolk Recruiting Sub Station.

More than 35 recruits from Suffolk, Portsmouth and Roanoke Rapids, N.C., gathered at the recruiting station off Burnetts Way.

The first hour and a half of the day had the recruits sit through a lecture, led by Pollard, about the values and moral codes of the U.S. Marine Corps. During the presentation, the group was shown several video scenarios and was asked to think about the ethics of the situations.

After the lecture, the recruits rushed to an adjacent field for physical training. The training started with stretching exercises and then ratcheted up to intense cardio and abdominal workouts.

The recruits split into groups and cycled among four stations.

At one station, the recruits were assigned in pairs, with one donning a belt and crawling on all fours and the other being dragged along in the mud between their partner’s legs. The second station involved an array of abdominal exercises.

The third required recruits to bunch together, arch their backs and remain planted on all fours. One by one, recruits would shoulder crawl through the mud underneath the “human bridge” and join the end of the line. Finally, the last station was burpees, a cardio exercise that combines squats, planks and jumps.

As the recruiters bellowed commands, the recruits responded in unison with strained faces and limbs shaking from fatigue.

Despite the grueling nature of the program, former recruits have said it has helped prepare them for boot camp.

Pfc. Brandon Woolston said he lost 60 pounds during the training, and it helped prepare him for boot camp’s challenges.

“I wanted to challenge myself and see how the Marine Corps could help me do better,” Woolston said. “This is the best program there ever will be for preparing young men and women.”

The recruits ranged between ages 17 to 25 and all had been in the program since last summer. Pollard said recruits could join as early as the summer before their senior year of high school. However, recruits had to be a part of the program for a minimum of six months, Pollard added.

Recruiters find participants by hosting class discussions and by setting up information tables around the community. There have also been those who have reached out directly to the recruiting station.