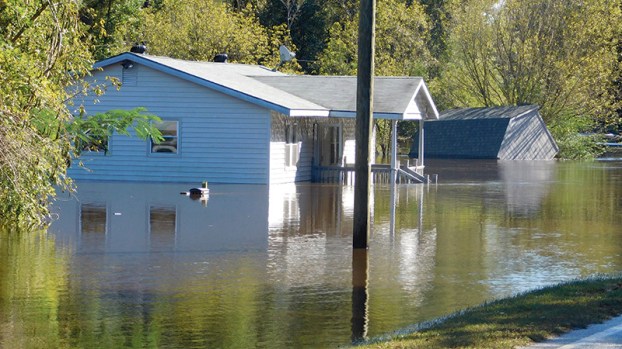 A home on Gates Road is flooded and its shed is overturned in the side yard on Monday.

By Sterling Giles and Tracy Agnew

Many spent the day cleaning up limbs, arranging for removal of fallen trees, retrieving cars disabled by flooding or just walking around marveling at the damage — all under an unbelievably clear, blue sky by early afternoon on Sunday.

The damage was worse in some places than in others.

Suffolk residents Mary and Joseph Boone were among those whose homes were flooded.

The couple decided to leave their Gates Road home on Saturday afternoon and stay with family due to the heavy rains and expected to return the following morning. However, their plans were derailed as the rainwater eclipsed a depth of six feet.

The Boones left behind their dog, Buddy, because they didn’t anticipate the high water levels. So Buddy was forced to fend for himself. The family believes he stood on his hind legs until help arrived the following morning.

“It was very traumatic,” said Felicia Stokley, one of the Boones’ daughters.

Suffolk Fire and Rescue came by the next day, equipped with a life raft, and was able to save the pup.

Unfortunately, the couple is no stranger to flooding.

Just two weeks ago, the property was flooded from heavy rains. The couple said the damage from Matthew was comparable to Hurricane Floyd from 1999.

“We were told it was a ‘100-year flood,’” Mary said, referring to Hurricane Floyd.

The couple didn’t anticipate they would face another severe storm after Floyd, which encouraged them to remain at the same property despite severe flooding over the years.

The Boones built their home more than 45 years ago and have resided there ever since.

However, Benita Boone, the couple’s other daughter, thinks they should consider relocating.

“It’s time to regroup about where to go next,” she said.

The couple’s neighbors on Gates Road also experienced flooding as well. The neighbor’s house to the right was nearly fully submerged, and the shed and the patio were overturned several feet from the house.

The family said the city predicts the water will recede to normal within the next two days. However, Joseph Boone said, “a lot will have to be tore out” and replaced.

Elsewhere in Suffolk, other neighborhoods experienced flooding and fallen trees.

Sam Farrow said the storm “was what he was expecting;” however, due to the flooding, he was stuck at home for the weekend.

“I didn’t lose power but I just couldn’t go nowhere,” he said.

Jennifer Dunn, crew supervisor with Nansemond Lawn and Garden Inc., said she “anticipated it to be a lot worse.”

Plenty of people didn’t know what to expect with Hurricane Matthew. The forecast varied throughout the week prior to its strike, with predictions ranging from a direct hit to turning away from Virginia completely. In the end, an upper-level trough interacted with the hurricane and swept its effects northwest of the storm’s center.

Corey Bamlton scoffed when he was reminded meteorologists had said Hurricane Matthew would turn south of Virginia and head out to sea.

Bamlton returned to his house off North Main Street in the middle of the storm to find a large branch had fallen on the roof and cracked it.

“It was coming through where the cracks are,” he said, while walking around downtown on Sunday and looking at the Nansemond flooding. “We put buckets all over the floor.”

Tiffany Smallwood was one of those retrieving her car on Sunday from where she had abandoned it in the midst of rising floodwaters on Saturday night.

“It was so strong,” she said, standing on East Washington Street and looking at her car, still surrounded by water. “I’ve never seen anything like it.”

Smallwood was taking a friend home from work and was driving near John F. Kennedy Middle School. Suddenly, a gray car in front of her stalled and floated to the side. She tried to turn around, but unfortunately it was too late for her, as well.

“It just seemed like the current picked up so fast,” she said. She and her friend bailed out of the car with water swirling around their calves from a rapidly rising creek that now crossed the road.

When her husband got to the car later and waded in to retrieve the keys, it was up to his hips, she said. Smallwood had hoped the car would start after it had a chance to dry out, but when she saw creek water in her cupholders, she knew that wasn’t going to happen.

Power outages were still affecting some on Monday evening. The Dominion Virginia Power website said 775 customers in Suffolk were still out of power, down from about 8,000 in the immediate aftermath of the storm.

The Sentara Belleharbour freestanding emergency room in North Suffolk was closed from 11 p.m. Saturday to 4:30 p.m. Sunday after suffering a power outage and generator failure. Patients who were there at the time of the outage were transferred to Sentara Obici Hospital, a spokesman said.

Suffolk Public Schools were closed Monday but planned to reopen Tuesday, with the exception of John F. Kennedy Middle School, which still didn’t have power as of Monday evening. The Boys and Girls Club after-school program housed there also will be closed.

Of all the devastation wrought by Hurricane Matthew in Suffolk, the hearts of the family of Derek Cason are hurting... read more