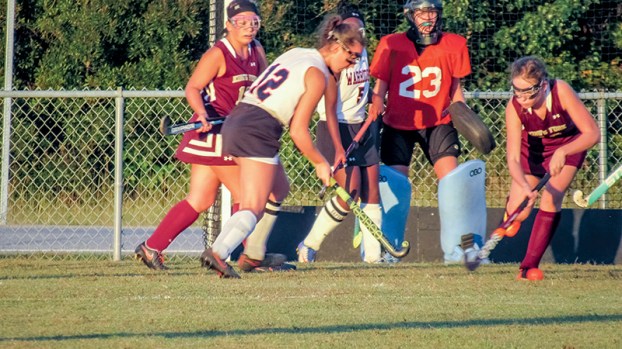 Lady Warriors Ariana Samuel and Sarah Rhiel did much of the damage Tuesday evening for Nansemond River as they defeated the Lady Bulldogs. Samuel had a hat trick on the evening, and Rhiel added two goals. With the win, the Lady Warriors have defeated both Lakeland High School and King’s Fork this year.

“We played pretty good,” Samuel said of her team’s effort. “It feels amazing to show everyone that we were able to beat both teams.”

The Lady Warriors came out strong after a four-day break. Their passes were strong, and they kept the field spread. As for the Lady Bulldogs, they feel as though their second half play should match their first half play.

“We came out strong in the first half,” the Lady Bulldogs’ Lauren Park said. “In the second half we don’t play as good, and that may be due to fatigue. We will get better.”

Rival games are significant, and the Lady Warriors wanted to prove that they were the best.

“This was a huge goal for us,” the Lady Warriors’ Mackenzie Roach said. “It really encourages us to keep playing our best. We are proud of our record against Suffolk schools.”

Nansemond-Suffolk Academy football fell to 2-4 after a 57-14 road loss against Blue Ridge School on Saturday. Through six games,... read more