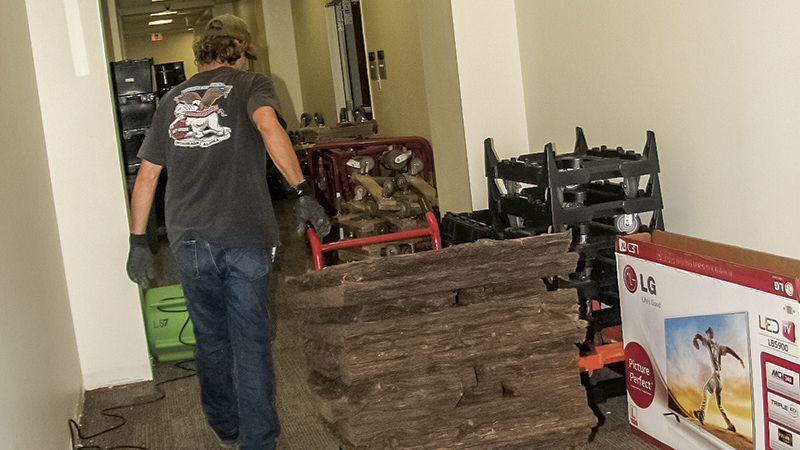 City workers and contractors spent Tuesday ripping out flooring and fixtures on the first floor of Suffolk City Hall. Water intrusion into the building caused damage to several first-floor departments, particularly on the west side of the building.

Water seeped into the building during the storm and caused damage to the floor and furnishings in several office spaces on the first floor of the building, which has been in use about two years.

City Manager Patrick Roberts said 911 staff, who work in the second floor of the building, first noticed there was water on the first floor on Saturday night, during the storm.

“We got staff in here from a few different departments to see if we could contain it and see where it was coming from,” Roberts said.

The water appears to have come up through floor drains in several areas, including bathrooms and mechanical rooms, as a result of the sanitary sewer system being overwhelmed, Roberts said.

The west end of the building got the worst of the damage. The treasurer’s office and commissioner of the revenue’s office, both on the east side of the building, got minimal damage.

The most affected departments included Planning and Community Development, Media & Community Relations/FOIA, Capital Programs and Buildings, Purchasing, the city clerk’s office — where the mayor’s office is — and the city mail room.

“The floor was significantly wet,” Roberts said. “Some staff came in overnight and did a pretty heroic job of pushing a lot of water out the back.”

“We didn’t have a situation where we had a lot of standing water for any prolonged period,” he said. “I feel like we got to it real quick to avoid any significant or long-term damages.”

Employees and contractors were busily working in the west side of the building Tuesday, removing flooring and molding and moving needed equipment to new workspaces.

Despite the disruption, most city departments were operating Tuesday. Planning and Community Development offices were closed, but customer service was available by phone. Roberts said they should be back open Wednesday.

Roberts said he does not believe there is any design flaw in the building.

“I keep calling it an unprecedented event,” he said. “It’s just a tremendous amount of rain in such a short period. We’re going to do a lot of exploration and make sure there was not a failure of any particular system.”

Roberts said the city also will investigate potential fixes to ensure the problem doesn’t happen again in the event of such an exceptional amount of rain.