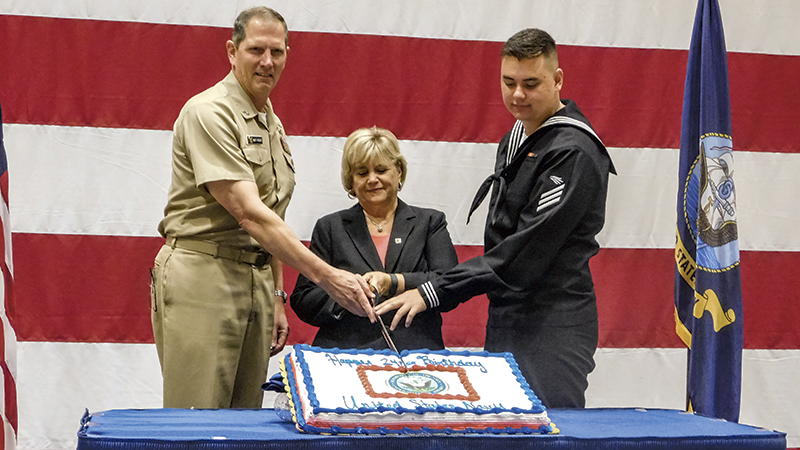 More than 200 servicemen and women gathered at the Department of Defense complex on Lake View Parkway on Thursday morning to celebrate the Navy’s 241st birthday.

The Naval Information Forces Command hosted the celebration. Mayor Linda Johnson and other city public officials were also in attendance.

“Each year is special to the military,” said George Bieber, editor-in-chief of the InfoDOMAIN magazine. “It’s a camaraderie thing — a mix of officers and civilians. It’s tradition.”

The ceremony began with the presentation of colors, the singing of the national anthem and a prayer.

Following this, a brief history of the U.S. Navy was given.

The War of 1812 was accredited as the turning point for the branch’s development. At the time, the Navy had only been established for 18 years with fewer than a dozen ships on hand.

Rear Adm. Matthew Kohler, who has served as the Naval Information Forces commander since its establishment in 2014, and Johnson also gave remarks.

Kohler highlighted critical battles and events the Navy was involved in since its inception and stressed the birth year’s theme.

“Today, we continue to stand tough, bold and ready,” he said.

In the closing minutes of the ceremony, as tradition, three people were selected to cut the birthday cake with a cutlass.

This year, Kohler, Johnson and Seaman Samuel Callahan were selected to cut the cake. The tradition is to have the oldest and youngest sailor and a guest to cut slices of the cake.

Originally, there was another sailor selected prior to Callahan to serve as the youngest sailor on grounds. However, that day happened to be Callahan’s first day of work at the base, which would officially make him the youngest at just 19 years old.

“It was a pretty cool opportunity,” Callahan said. “It’s a big deal — an E-3, my first day and I got to shake hands with the Admiral.”

The mayor was elated to be a returning speaker for the birthday ceremony.

“This is a day among friends,” Johnson said. “There is no comparison — our Navy is the best.”