Eleven candidates for mayor and City Council seats participated in a forum sponsored by the Nansemond-Suffolk branch of the National Association for the Advancement of Colored People on Thursday at Living Waters Christian Center. 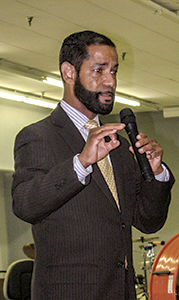 Martin Randolph, a voter turnout and registration strategist with the NAACP, was the featured speaker during the first panel during a local NAACP event Thursday night. The second half was a forum for local City Council candidates.

The only candidate sitting out was Councilman Lue Ward of the Nansemond Borough, though he was in attendance. Moderator Seneca Bock said he was not feeling well. Ward’s former opponent, Ben Fitzgerald, has suspended campaign activities, although he still appears on the ballot.

The 11 participants answered questions on topics ranging from education and economic development to term limits and whether they support the Affordable Care Act. About 60 people were in the audience.

The NAACP posed a question about how the candidates would seek to improve job opportunities for minorities.

“The jobs we are getting require a different type of workforce,” she said. “Jobs, education, economic development, it’s all going together.”

Kerry Holmes, one of four running against Johnson, said he will have a disparity study done if he is elected to look into how many small, minority-owned firms are getting city contracts.

“If you can’t identify the problem, you can’t fix it,” Holmes said.

“Many of the minority businesses are having problems being able to meet the requirements,” he said.

Economic development is a priority for LaTroy Brinkley, a candidate in the rural Whaleyville Borough. More restaurants and stores are needed for residents to patronize, he said.

“We’re already a great place, but we can make it much better than what it is,” he said.

Many of the candidates named education as one of their top priorities during their introductory speeches.

“Our education needs to be addressed,” said Brian Bass, a candidate for mayor. “We need to foster relationships with our School Board.”

Raymond Batton, a candidate for the Sleepy Hole Borough, said he will work to be able to fund the schools appropriately.

“I believe our city is on a path of moving forward,” Batton said. “Wouldn’t it be great if we could list our city as No. 1 for education?”

Roger Fawcett, the incumbent in the Sleepy Hole Borough, said the city has been able to invest millions in the school system, including for two new schools in North Suffolk, due to its high bond rating.

“We would not be able to do that without those bond ratings,” he said. “That is significant. Those AAA bonds mean a great deal for this city.”

Curtis Milteer, the incumbent in the Whaleyville Borough, said education and economic development are some of his priorities.

“We need to maintain our school system,” he said. “Economic development will bring jobs to the citizens in the area.”

Asked about term limits, Whaleyville Borough candidate Vanessa Harris said people and institutions have to be willing to change.

“I think that if you are capable, there’s no term limits, but if you are not doing what the people want, there should be a term limit,” Harris said.

Mayoral candidate Charles Scott said “checks and balances” should be instituted to keep the governor from becoming too heavy-handed in education regulations.

Each of the candidates was asked whether they support the Affordable Care Act, and each said yes, although some added “with changes” or “with overhaul.”

“The treasury makes money,” he said. “The government should fund it.”

Bock, the moderator, said the NAACP was pleased with the diversity of candidates in age, gender and race and appreciated how the forum went.

“I’ve never seen it this interactive,” she said. “We have a lot to think about.”

She warned the candidates not to “underestimate” the NAACP.

“We vote, and we educate,” she said. “Please take us seriously. Too much is at stake.”

The Suffolk Police Department is investigating a shooting that left one man injured. Police responded to the 100 block of... read more