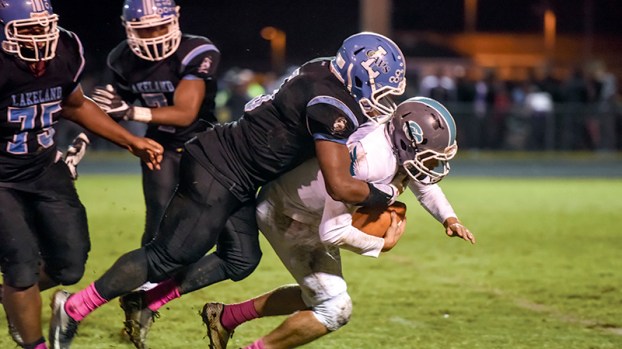 Sarah Murphy/Beansprout Photography Lakeland High School Cavaliers senior Trevon Claude gets a tackle against a Hickory High School player Friday during the Cavs’ homecoming game. The atmosphere provided good support to the team as they rolled against the Hawks.

The Cavs improve to 5-2 after the victory. After a disappointing loss to rival King’s Fork last weekend, the Cavs didn’t allow the loss to linger as they shut out their opponent.

“It felt good to get that win,” Cavs coach Kevin Knight said. “The way they responded from a loss last week was very good, especially for our defense.”

The Cavs defense, which limited an Oscar Smith offense to 17 points a few weeks ago, proved that on any given night, they can make it tough for their opponent to score against them. Friday night was evidence again as the Cavs didn’t allow a score all night.

Though LHS only has two losses, after each of them, they responded with wins the following week.

“Coach Richardson does a good job of putting guys in place to make plays,” Knight said of his defense. “Guys were flying around doing their jobs and having fun.”

The Cavs scored 13 of their 21 points in the first quarter. Hickory didn’t make anything easy for the Cavs from the second quarter all the way to the late fourth quarter where the Cavs had their last score of the night.

“They were very strong up front. They had one of the strongest fronts we faced all year,” Knight said about Hickory’s defense. “They had a lot of fight. I’m proud of coach Wilson and the job he’s doing over there.”

The homecoming atmosphere was a good one for the Cavs. Lots of students, fans and alumni came out to support the team, and the players were able to feed off of that energy.

“The atmosphere was amazing,” running back Damontra Milteer said. “They made us want to give them a show. They really helped us out there tonight.”

“It was exciting,g it was loud, and the fans were in the game the whole time,” Knight said. “That’s what it’s all about — the city coming out and supporting and having fun. It was a great night.”

Milteer led the way offensively for the Cavs, with 15 rushes for 109 yards and a touchdown. Alajuwun Langston added a touchdown, as did quarterback Tyquan Holloman.

Warriors’ second half push gets win

After being shut out on the road last weekend, the Nansemond River High School Warriors regrouped with a 27-7 win... read more