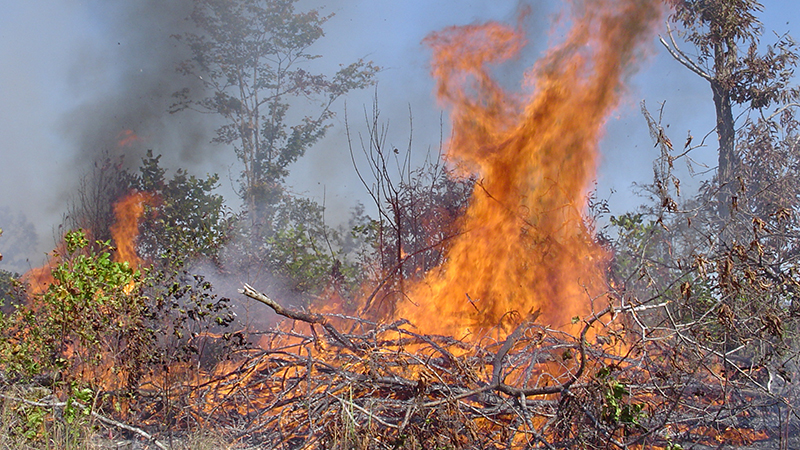 Each autumn, the threat of wildfire increases as leaves dry out and fall from trees, grasses turn brown, humidity levels drop and winds increase. These conditions create an abundant source of fuel for wildfires, which can spread rapidly, increasing the chances of injury and property damage.

With more than 62 percent of Virginia’s land base — 15.9 million acres — being forested, there are almost 360,000 homes and more than 1 million Virginians living in areas defined as woodland communities. “That’s a lot of lives and property at risk due to wildfire,” Miller said.

On average, nearly 1,000 wildfires occur in Virginia each year, burning a total of more than 11,000 acres. More than 95 percent of these fires result from human activity. Of the nearly 150,000 wildfires fought by VDOF since 1916, most were caused by people burning trash or yard debris.

“Whenever possible, practicing alternative debris disposal, like composting or mulching, can help reduce the chances of accidentally starting a wildfire,” State Forester Bettina Ring said. “But if those are not options and burning is necessary, being mindful of weather conditions and taking simple precautions can make all the difference in keeping people and their property safe.”

Clearing the burn spot and surrounding area down to mineral soil

Having tools like a shovel or a rake on hand

Do not leave the fire unattended, and make sure it is totally extinguished before leaving

“It’s vital that people check the weather conditions in their area before starting to burn,” Ring said. “If it’s been several days since it’s rained, humidity levels are low and the winds are higher than 10 miles per hour, wait until conditions improve; otherwise, it’s quite likely your fire will become a wildfire.”