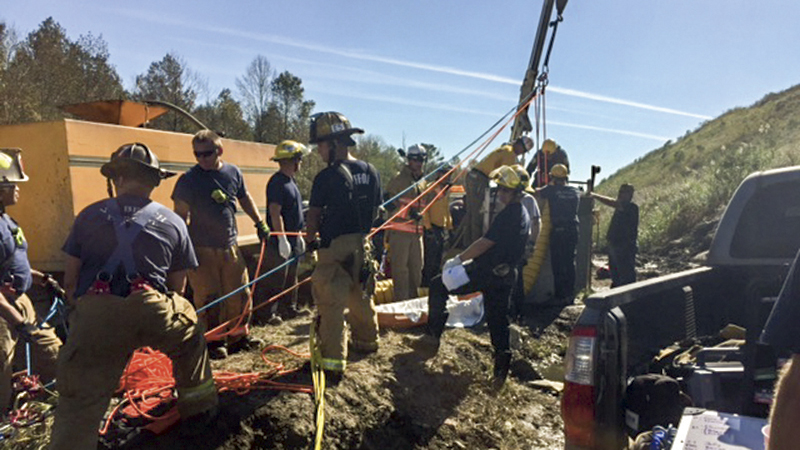 Rescue workers attempt to remove two landfill workers from a vertical pipe at the John C. Holland Landfill off Nansemond Parkway. The two men died during the incident. City of Suffolk photo

Two employees of a private Suffolk landfill died on Tuesday after being trapped in a vertical concrete culvert, Suffolk officials stated in a press release.

Suffolk Fire and Rescue personnel worked Tuesday afternoon to free the two men, who were confirmed in a 2:30 p.m. press release to have died.

Technical rescue crews were called to the scene at the John C. Holland Landfill, located off Nansemond Parkway, at 11:06 a.m. and arrived on site at 11:19 a.m., Klink stated in a press release.

Klink stated she had been advised by Deputy Chief Ted Adams that the two adult men were “confined to a vertical concrete culvert at the landfill.”

Because of the location of the incident on the 70-acre landfill, rescue workers had to use four-wheel-drive vehicles to transport their equipment and personnel to the site.

Klink stated that crews from Chesapeake, Norfolk and Virginia Beach were also contacted for assistance. They used rope and harness equipment to assist in the recovery effort.

She stated the cause of death had not been determined, and that the Suffolk Police Department and OSHA would be conducting an investigation.