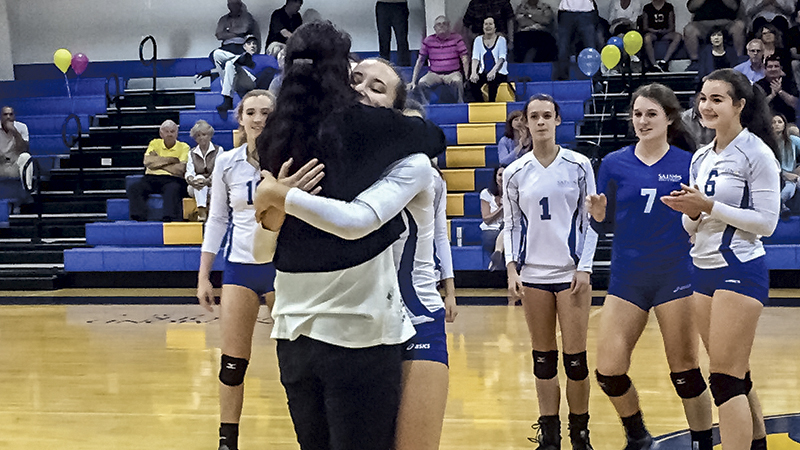 Livi Bono is congratulated by her team after getting her 1,000th kill. Bono is the second player in NSA history to do so. submitted photo

The win gave the Lady Saints their eighth conference victory of the season and a 21-4 record on the year.

“Our performance has been consistent with the rest of our games,” Lady Saints Nicole Wright said. “We try to improve every game.”

Walsingham seemed to be overmatched most of the game.

“I think we played really well,” NSA senior all-time digs leader Logan Harrell said. “We didn’t allow ourselves to play down. We minimized our errors, which kept the game a low scoring one.”

NSA celebrated more than just a win Tuesday evening. The Lady Saints’ Livi Bono had 19 kills which allowed her to reach 1,000 for her career and become the second player ever to reach the milestone there.

It is an unbelievable accomplishment in Bono’s eyes and an achievement her teammates and coaches were proud to witness.

“I’m so proud of Livi, and I loved watching her improve since our freshman year on varsity,” Harrell said. “She is such an amazing player, and she really deserves it.”

“We are all proud of Livi for such a huge accomplishment,” Wright said. “It took a lot of hard work and determination throughout the years. Having it achieved on Senior Night was even more special for her and the team.”

Bono is not of typical size for the position she plays, which makes her accomplishment mean so much more. She goes up against blockers who are taller than her and averages around 15 kills a game.

“I have been able to watch her grow from a timid player afraid to go for the big kill into this amazing player who plays bigger than her 5-foot-7 frame,” Lady Saints coach Robyn Ross said. “I am happy for her and all of her hard work.”

As for the rest of the seniors, Ross said she has had the pleasure coaching all of them.

“They are my girls and a part of my heart,” Ross said. “It gets harder every year to say goodbye to these girls I love so much. Getting to watch them grow into the women and leaders they are is a privilege I thank God for daily.”