Firefighters extinguished a fire in a Holland-area residence on Wednesday afternoon. 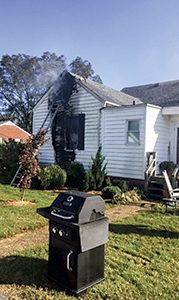 Firefighters extinguished a fire at a Holland-area residence Wednesday afternoon. Two adults were displaced and are being assisted by family.

Upon arrival, Engine 4 encountered light smoke showing from the attic of the residence, according to Deputy Chief Ted Adams in a media release.

A resident had evacuated prior to the arrival of firefighters.

The fire was called under control at 3:41 p.m., and no injuries were reported. Two adults were displaced and are being assisted by family.

The fire marshal’s office is investigating the cause of the fire.