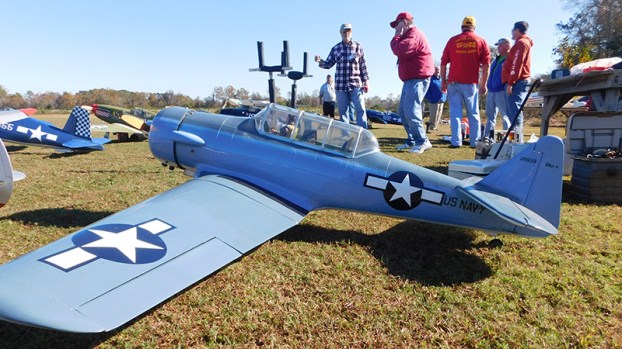 Beginning with a free cup of Joe from a local Starbucks at 8 a.m., attendees gathered to have a fun day of aviation.

“This is one of the best days we’ve had in five years, because of the weather,” said Chris Weeks, club vice-president. “The contributions exceeded our expectations.”

The purpose of the event was to raise funds and toys for Suffolk’s Toys For Tots. To date, the event has raised more than $15,000 and collected thousands of toys.

Typically, the event attracts 20 to 30 radio-control pilots. However this year, more than 45 registered, according to Weeks. The event attracted pilots from as far as North Carolina, Richmond and Fredericksburg.

For most of the day, the pilots flew their respective planes, which came in an array of colors, shapes and sizes. There were also electric-powered planes among the bunch.

Jeff Haywood, club president, said there is occasional friendly competition among the pilots. 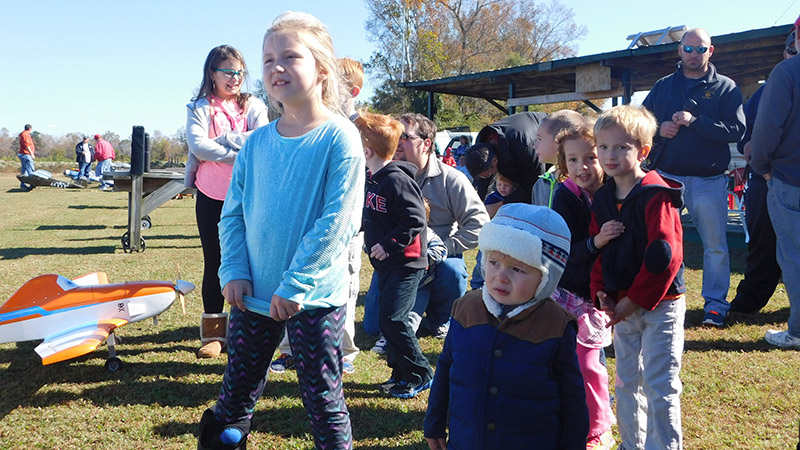 A group of children awaits Skydive Suffolk parachutists, dressed in Christmas and Halloween costumes, to arrive at the Hampton Roads Radio Control Club’s annual Fun Fly. The event was a fundraiser for Suffolk’s Toys For Tots.

Toward the end of the event, a Pilot’s Choice Award was presented to most visually appealing aircraft.

In addition, Skydive Suffolk dropped in for the fun.

Just after noon, the parachutists, wearing Christmas and Halloween costumes, jumped from several thousand feet overhead and were welcomed in by excited children as they landed at the airfield off Pembroke Lane in Chuckatuck. Skydive Suffolk owner Mike Manthey, who was among the jumpers, was dressed in a Santa costume.

In honor of the event’s cause, Manthey and his “elves” donated toys for Toys for Tots. Afterward, “Santa” talked with the children in the crowd about their behavior and what they wanted for Christmas.

The Sentara Nightingale air ambulance had been scheduled to stop by, but it was unable to come out due to an emergency.

Toward the end of the event, Haywood presented Manthey and members of Kingdom Kuts and the Chuckatuck Volunteer Fire Department with plaques for their sponsorships and for helping with the event.

In addition, a local UPS Store, the Eagle Hobby Store and the Sentara Nightingale were among the event sponsors.

The event was once again a success and the HRRC was very appreciative of the community support.

“It turned out to be a great event,” Weeks said.

In its 10th anniversary year, a website that consolidates local holiday events now comes in the form of an app.... read more