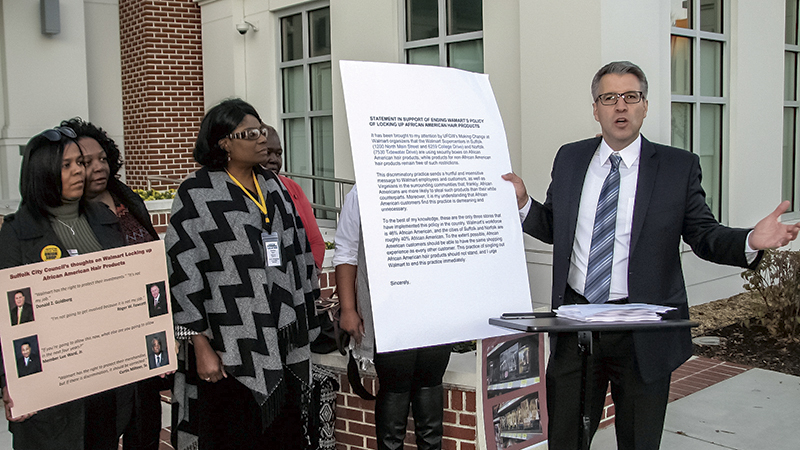 Randy Parraz, a campaign director with the United Food and Commercial Workers International Union, conducts a press conference with other activists in front of City Hall on Wednesday. The group said Walmart is being discriminatory by locking up hair care products for black people in its Suffolk stores, but not treating products for white people the same way.

Activists this week called attention to what they say are discriminatory practices at the Suffolk Walmart stores related to differences in the way hair care products are displayed in the stores.

“It’s not a uniform policy,” said Randy Parraz, campaign director for UFCW. Stores in other parts of the country do not do that, he said.

The activists specifically named the two Suffolk stores as well as a store on Tidewater Drive in Norfolk.

“To the best of our knowledge, they are the only stores in the company to have implemented such a policy,” said Anahi Torres, organizer for Making Change at Walmart, a UFCW program.

Phillip Keene, director of corporate communications for state and local initiatives and public affairs for Walmart, said the company is “disappointed with these allegations, because they are false and offensive.”

“It’s all based on protective measures that are numbers-based and research-based at that store,” he said. He declined to share numbers, citing company privacy concerns.

“We try to make sure we keep it in the store, available for sale,” he said. “These measures are not a reflection of our valued customers, and any attempt to insinuate otherwise by this particular group is shameful.”

The Suffolk News-Herald visited the North Main Street store this week and noticed several styles of “do-rags,” one of which cost only 94 cents, displayed in individually locked boxes. Bottles of Bigen brand hair color, which is marketed to black women, were also locked up. Most had a price of less than $4.

Other hair care products, including some others marketed to black consumers, were not displayed in such a manner.

“It’s discriminating against some people, because black products are locked up and other products aren’t,” said Julia Newton, who was at the press conference with the Service Employees International Union. “It’s unfair to all the shoppers that shop at Walmart. Everyone wants to be treated fairly.”

“This is about customers who are black having a totally different experience because of their genetic makeup,” Parraz said.

Parraz also noted that many employees of Walmart stores are black.

“You can trust them when you hire them, but not when they come in the door to buy a product,” he said.

Tiffany Beroid said she first noticed the security practices at the three stores in September. She made return visits later, and the security boxes had been removed at the North Suffolk store as well as the one in Norfolk, but not at Suffolk’s North Main Street store.

She said the practice is hurtful, because black customers have to take the product in the security box to the checkout and wait for the cashier to find the key and unlock it before they can purchase it. It makes black customers feel singled out, she said.

“It’s unfair, and it’s unjust,” Juanita Hart, a Suffolk resident, said during Wednesday’s City Council meeting. “I think if we stop spending our money at Walmart, especially during this time of the year, that may just change their perception of what they think of us.”

The group spoke at the City Council meeting to urge the council to take a stand. However, Torres said, she received less than satisfactory responses from council members when she called them.

“A lot of the response I received was unpleasant and disrespectful,” she said, citing comments such as “not my job.”

Parraz said the group is not asking the city for a lawsuit or regulations of Walmart, but more of a values statement.

“This is happening under your watch,” he said. “You have citizens having a different experience in a store you allow.”

He held a petition with 20,000 signatures, including 1,500 from the local area. He also said the group will deliver the signatures to Suffolk’s North Main Street store at 10 a.m. Thursday, as well as take action related to the specific products that he did not want to discuss.

Councilman Lue Ward said he was concerned with what he had heard about his colleagues’ responses. Vice Mayor Leroy Bennett said he would go into Walmart and look around.

“This is the first time I had heard of that,” he said.

They were the only two to address the issue during the meeting.

In response to a question from Ward, City Manager Patrick Roberts said citizens who feel discriminated against have options, including filing a complaint with the Civil Rights Division of the U.S. Department of Justice or filing suit in U.S. District Court.

As far as council goes, “It is not only the expectation but the aspiration of this council that Suffolk is a city where everyone can achieve their goals and be successful and that we are all equal,” he said.

As long as council members are conveying that, “you have adequately and fully done your job.”