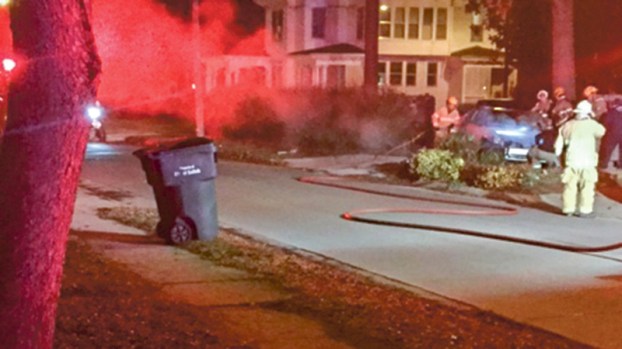 A man was rescued from this fiery crash early Thursday after the fence he struck on Smith Street ruptured the gas line. City of Suffolk Photo

Firefighters and police officers saved a man from being trapped in a flaming vehicle after a crash on Smith Street early Thursday morning.

The accident was reported at 1:02 a.m., according to a city press release. Officer arrived in the 500 block of Smith Street and found the vehicle engulfed in flames with the driver still inside.

The officers used their fire extinguishers to subdue the fire until the arrival of fire crews, according to the release. The driver was the only occupant of the vehicle and had to be extricated by Suffolk Fire and Rescue personnel. He was taken by ground ambulance to Sentara Norfolk General Hospital with injuries not considered life-threatening.

Preliminary investigation found the vehicle left the roadway and hit a tree and a fence. The fence then ruptured the gas line, causing the fire.

Smith Street remained closed for part of the morning as crews continued the cleanup of the crash.

Opponents of the U.S. Route 460 project are celebrating the project’s apparent demise after it failed to score high enough... read more