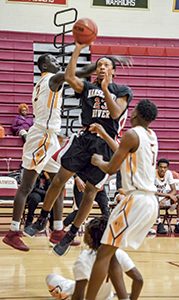 Gerard Stringer takes the ball strong to the rim for the Warriors during their win over Warwick High School. Nansemond River High School ended the regular season on a four-game win streak.
Linda Lewis photo

The Warriors are currently in a four-game win streak after defeating Warwick 61-49.

Dy’Quan McGhee was assigned to guard Warwick’s top scorer, who averages 20 points. McGhee was able to limit him to 10.

“We’ve been playing great,” Hale said. “We are making fewer mistakes, and everything is really starting to come together. I can certainly see our confidence in everything we are capable of doing.”

Out of the 14 players that were dressed for the Warriors, 11 of them scored.

The win solidified Nansemond River as the fifth seed in the Conference 10 tournament. They will be matched up against Gloucester, who beat them at the buzzer on Jan. 18. The two will meet again Feb. 14 at 4:30 p.m. at Menchville High School.

“We are doing the right things, and everyone is playing their roles,” Warriors coach Ed Young said. “The team’s confidence level is up, and the defense looks good. Those things lead to wins.” 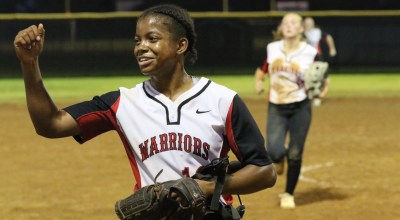 Nansemond River alum to play for the Hokies this fall

Nansemond River had the inside track on state championships as boys, girls sweep titles