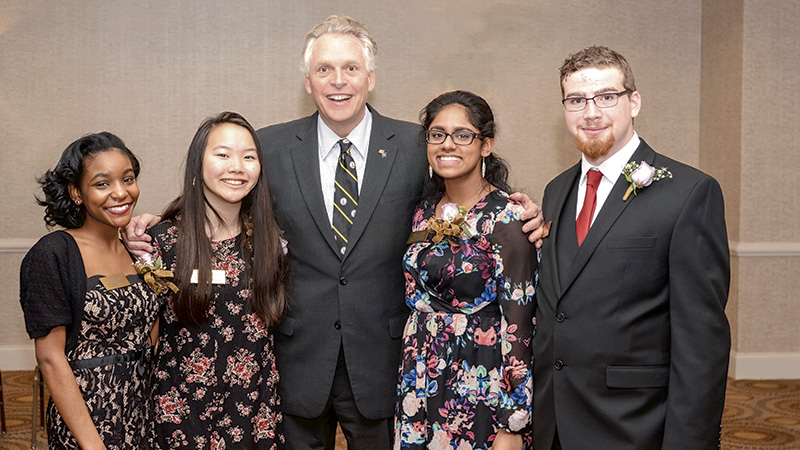 Two Suffolkians were honored by Dominion Resources and the Library of Virginia during its “Strong Men and Women in Virginia History” program earlier this month. On far left, Indya Gipson of Nansemond River High School was one of four student essay contest winners, pictured with Gov. Terry McAuliffe.

Two Suffolkians were honored during the fifth annual “Strong Men and Women in Virginia History” awards program earlier this month.

Dominion Resources and the Library of Virginia put on the program each year to recognize prominent African-Americans, past and present, who have made significant contributions to Virginia, according to a press release from Dominion.

“I was really excited about it,” Tolbert said of the award. “But I’m not doing things to receive awards but rather that what I’m doing will have a benefit to the community.”

Tolbert was born and raised in the Saratoga community. Her parents died young, but Tolbert persevered. She attended Tuskegee Institute, now Tuskegee University, to receive a bachelor’s degree in chemistry. She ultimately obtained her master’s degree in analytical chemistry as well as a doctorate degree at Brown University. 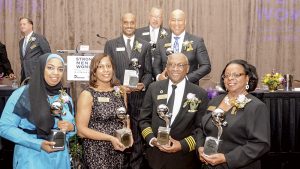 Two Suffolkians were honored by Dominion Resources and the Library of Virginia during its “Strong Men and Women in Virginia History” program earlier this month. On far right, Dr. Margaret Ellen Mayo Tolbert was among the adults honored.

She worked as a chemistry professor at Tuskegee and was soon promoted to associate dean of the school of pharmacy. She later earned a fellowship at the National Institute of General Medical Sciences and then became the first female director of the Carver Research Foundation at Tuskegee.

She then came back to the Washington, D.C., area and worked at the National Science Foundation. She later became director of the New Brunswick Laboratory and Argonne National Laboratory before retirement in 2011.

About a year ago, Tolbert published “Resilience in the Face of Adversity: A Suffolkian’s Life Story,” about her life. She had previously published three scientific and technical books.

She was nominated for the award by Dr. Tony King, a Richmond-area physician, who also is from the Saratoga area and had read Tolbert’s book.

Tolbert received a $5,000 gift to designate to the organization of her choice. She directed it to Tuskegee University’s chemistry department.

“I’m really feeling blessed that they thought of me in this way,” said Tolbert, who is currently trying to decide on the topic of her next book.

Indya Gipson was one of four students from throughout Virginia honored at the event as the winners of a student essay writing contest.

Gipson is a junior at Nansemond River High School, where she participates in drama and is part of the social justice club.

She wrote an essay on the prompt given, which focused on “how our differences are pushing us apart and what I’m doing to make sure we stay together as a community,” Gipson said. The winning four essays were selected from about 200 entries.

She said she enjoyed the Feb. 1 banquet at the Richmond Marriott.

“It was definitely a really good experience,” she said. “I met a lot of inspirational people. I definitely left the event with more inspiration to do more in my community.”

Gipson hopes to major in computer science or journalism and is interested in attending Virginia Commonwealth University or the University of Virginia.

“I’m really big on STEM and women in STEM,” she said. “I’m really pushing for that. I want women to consider going into computer science and science and math skills. That’s something I really enjoy.”

As part of her award, Gipson received a Macbook Air laptop, which she is excited to use in college, and $1,000 for Nansemond River High School.