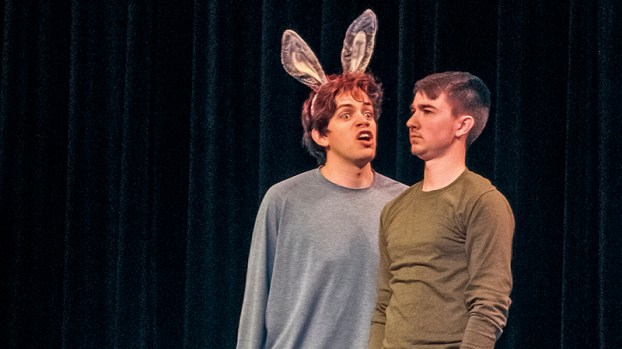 Justin Jones, left, and Timothy Wright perform a special sneak preview of “Shrek,” sans costumes, for members of the board of directors of the Suffolk Center for Cultural Arts on Wednesday. The musical is set for four performances in April.

Months of rehearsals for a community musical will culminate this spring in the lovable tale of a green ogre and how he finds true love.

The “Shrek” stories most people are familiar with through film will find new life on the stage of the Suffolk Center for Cultural Arts in April.

Renee Perry Mitchell, whose studio RPM Dance is partnering with the center on the production, said she was drawn to the show because of its message, its large cast and its accessibility.

“I tend to be drawn to shows based on the theme of the show,” she said. “It’s all about getting to know the real person as opposed to the outside cover.”

The show has a cast of 33 ranging in age from 7 to more than 50, Mitchell said. She also likes that the show will be more accessible because many people are already familiar with the Shrek movies.

“We want people to discover theater,” she said. “We wanted to choose a show that was more accessible to more people.”

The story follows Shrek, an ogre, who befriends the slightly annoying Donkey. The two fight a dragon and rescue Princess Fiona, who is cursed with turning into an ogre at sunset.

“One of the things that draws me to a show is what is going to challenge me,” Wright said. “You can’t get much different than a green ogre. I really like the character of Shrek, and it’s really different from who I am.”

Wright said part of Shrek’s journey is about accepting himself for who he is.

“We all come to a point where we have to decide, this is who I am, and this is what it’s going to be,” he said.

Horton said she enjoys the part of Fiona because of the music and the dancing.

“I love all the music that Fiona sings, because it’s such a wide range,” she said, adding that she has been working hard on a tap solo. “I feel like I have grown a lot in my dancing.”

Jones said he enjoys playing parts that are comic relief, such as Donkey.

“I enjoy characters that are funny,” he said, even though he played a devil character in his last show. “This is more like me, to be more fun and whimsical.”

The show will take place on April 1-2 and 8-9 at 8 p.m. on Saturdays and 3 p.m. on Sundays. Visit www.suffolkcenter.org for tickets or more information.