Extra layer of protection at Obici 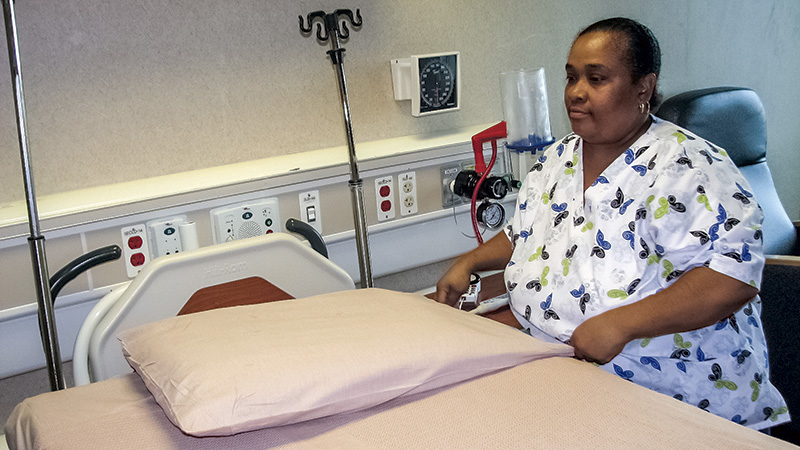 Joyce Knight, an environmental services association at Sentara Obici Hospital, makes a bed at the hospital on Monday using new copper-infused linens that officials say will help reduce infection rates by killing bacteria before it can spread.

Patients at Sentara Obici Hospital have been noticing a change in the color of their linens this week.

The hospital on Monday began rolling out new copper-infused linens, which have been found to prevent transmission of infections, according to hospital officials.

The new copper-infused sheets, pillowcases, blankets, towels and washcloths have a tan or salmon hue. New patient gowns are also copper-infused but have a colored print.

Eventually, molded hard surfaces in patient rooms, such as bedside tabletops and side rail covers, will also be delivered in copper-infused form.

The products are said to kill 99.9 percent of organisms in two hours, Doloresco said.

“Copper has been used for centuries because it has the capability of killing microbes,” she said.

A 10-month trial at Norfolk’s Sentara Leigh Hospital found that the copper-infused products contributed to a 78-percent reduction in multi-drug resistant organisms, according to Sentara. The results of the trial were published in September 2016 in the peer-reviewed American Journal of Infection Control.

Follow-up studies are being done, but Sentara was confident enough in the results to go ahead and roll out the new products to all 12 of its hospitals, at a total cost of a little less than $1 million, spokesman Dale Gauding said.

The products will not cure an infection that’s already in the body. But they will help kill organisms that may be living in the room and potentially keep the patient from becoming infected or keep them from spreading to other patients.

“It’s an added layer on top of an already rigorous program to prevent infections,” Gauding said. “It’s not a substitute by any stretch.”

Dr. Lora Herman, vice president of medical affairs, said the copper-infused products are another way to fight the battle against the infamous multi-drug resistant organisms. Even though it’s difficult to kill them in the body, copper does kill them when it comes into contact with them. Therefore, the products may keep patients from becoming infected in the first place.

“It’s a way to add that extra layer of protection,” Herman said.

The hospital hopes for an improvement to its already “very low” rates of hospital-acquired infections, Herman said.

The linens will likely change color over time as they are washed, but the germ-killing properties never go away, Doloresco said.

Only inpatient beds will have the copper-infused linens. Pass-through areas such as the emergency room and post-surgery intensive care will continue to have white linens, as many patients don’t stay long enough in those rooms to get the full benefit of the germ-killing copper.

White linens will continue to be available for patients who have a sensitivity to copper or suffer from one of several diseases resulting from the body’s inability to regulate the amount of copper it retains.

Patients at the hospital and their families will be informed about the new linens through tent cards and information in their admissions packets.

Sentara is examining the potential for copper products in its nursing and assisted living centers.