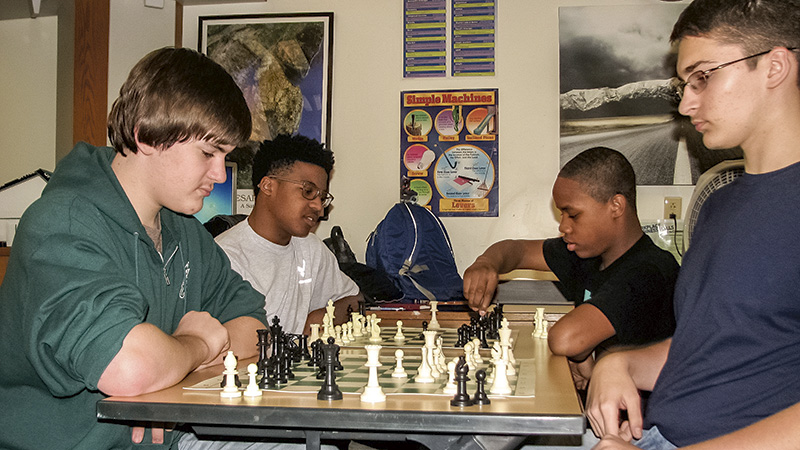 In some high school settings, chess might be considered uncool because it’s not a sport or a video game.

But that’s not the case at King’s Fork High School.

Not only do hundreds of students at the school know how to play chess, thanks to STEM teacher Todd Gidley, but the school now has a competitive chess team. The team had a successful first foray into state competition this weekend, producing first- and second-place winners in different divisions.

“It’s not looked down at here,” Gidley said.

Gidley has been teaching chess in his classroom for years to develop students’ critical thinking and problem-solving skills. The team developed organically from there.

Several students have developed a passion for chess and formed a chess club. Dr. Stenette Byrd III, director of secondary leadership for the school system and former principal at King’s Fork, encouraged the club to form a team and play against other schools, Gidley said.

The club includes about 18 to 20 students, Gidley said, and is coached by Gidley and Bryan Flores.

Every Tuesday and Thursday, the students gather after school to play against each other and practice their skills. They also put in a lot of hours practicing at home, Gidley said.

Nobody at King’s Fork looks down on chess, he added. The chess club includes athletes and JROTC students. Everybody recognizes the benefits.

“The strategy of chess applies to every athletic team and a whole bunch of real-world stuff,” he said. “These kids walk out of here being better thinkers.”

Many of the students, including Ty, said they initially learned how to play chess from an older relative.

“My dad and I used to play each other,” Ty said. “I always enjoyed chess, but I didn’t have anyone else to play with besides my dad.”

Gabriella Gardner, vice president of the club, said she also learned from her dad. She reported benefits that extended beyond academics.

“It has helped with making a lot of friends, and being a team made us a family,” she said. “It’s nice to be part of something like that that holds value.”

Peyton Storms also said he learned from his father and grandfather, who were both state champions in their day.

“I joined so I could continue their legacy,” he said. “It’s helped me focus on the task at hand.”

The students, even those who will graduate this year, said they hope to continue playing competitive chess. There are tournaments for college students and adults, too.

“If I improve at the rate I think I’m going to improve, I’ll be beating people higher ranked than me,” said Gabriel Williams, who said this weekend’s tournament was a new experience. “Subconsciously my mind was trying to cope with being in a public place playing with someone I’ve never met.”

Your right and your business