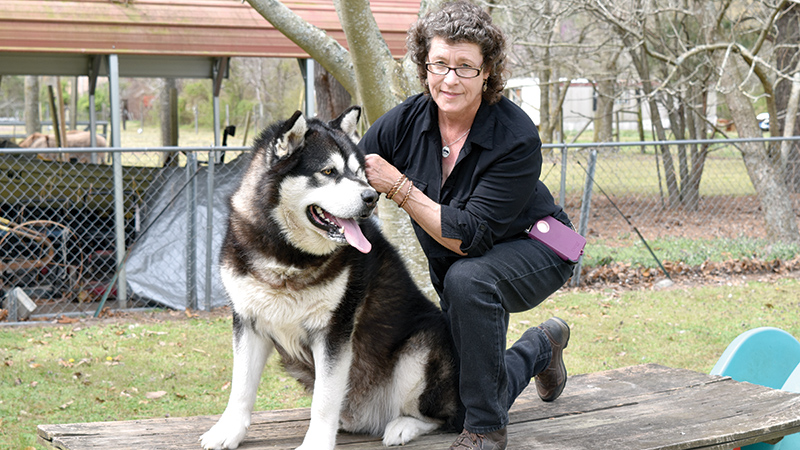 Giant Alaskan Malamute Delbert eats two to three cups of “top-dollar” dog food a day, according to his owner, Debbie Lee. The International Weight Pull Association has 10 different weight classes and he’s in the second-highest at 150 pounds, and his diet is controlled accordingly. “If he gains one more pound, he’ll be in another class,” Lee said.

The Mid-Atlantic Weight Pullers competition brought dog owners to Epps Farm Supply on Saturday and Sunday. The association promotes the working heritage of all dogs through physical training and safe competitions.

Each dog has 60 seconds to pull a cart filled with cinderblocks 16 feet and is judged based on total weight pulled.

Delbert pulled 5,400 pounds to break the record. The two-year-old, 150-pound, giant Alaskan Malamute has broken the record repeatedly in the past few months and is only getting better.

“He hasn’t even reached his potential yet,” said Debbie Lee, Delbert’s owner and Tidewater regional representative for weight pulling.

Delbert will travel to Spokane, Wash., in May to compete in an International Weight Pull Association competition against dogs from across the United States and Canada. Lee said these competitions bring hundreds of diverse dogs with surprising strengths.

“We have even had deaf Boston terriers outpull pit bills,” she said.

She said the dogs get the best possible food, training and care. She and other dog owners do not tolerate any abuse or mistreatment.

“It serves no purpose to harm them,” she said. “It has to be a very positive thing for them to do it. I’ll kick people out if there’s something I don’t like.”

Lee has been training dogs for 24 years and is an official judge for the IWPA and the United Kennel Club. She said the owners at these competitions are a community of animal lovers, and many participate in animal rescue or the SPCA.

“A lot of people that are in this are just truly into animals,” she said.

Owners that attend IWAP competitions have partnerships with the dogs built on strong and rewarding bonds.

“It’s something that makes your heart feel good to bond with an animal,” she said. “Some people just don’t get that with other people, but they get that with their animals.”

Lee lives on a six-acre property in Gates, N.C., with all kinds of animals. She has three donkeys and a mule. She raises peacocks and guineas that she sells to regular clients. Beside her house is a Koi fish pond.

“I’ve had everything,” she said.

She also raises several other dogs along with Delbert, including a Dutch shepherd, a mastiff/great Dane mix, and a 15-year-old Jack Russell terrier.

“Everybody has got their thing they like to do,” she said. “I love animals.”