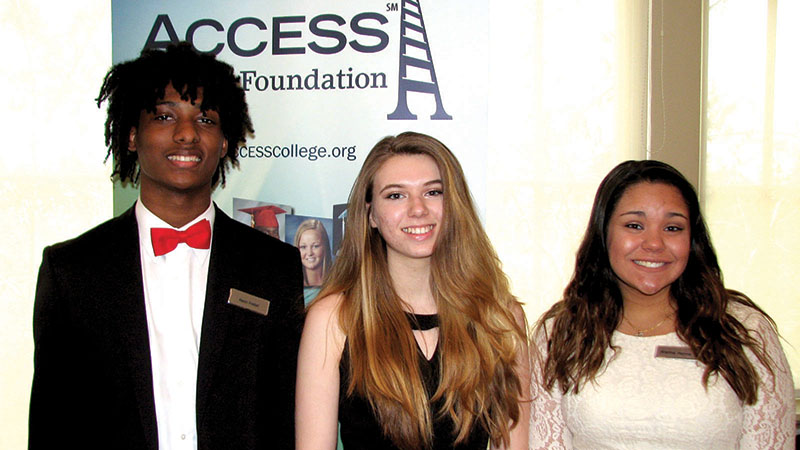 The Access College Foundation on Monday held its annual donor recognition luncheon for Suffolk supporters, but the stars of the event, as they are every year, were the students.

A soon-to-graduate senior from each public high school in Suffolk told donors how the Access College Foundation has helped them through the college process, from helping them apply for application fee waivers and seek financial aid to helping them decide on their choice of college and major.

Each of the students overcame personal struggles to get where they are today, but now, each has a plan for college and a career.

Alexxis Wood, a Nansemond River High School student, told the small crowd at the Suffolk Center for Cultural Arts about how her family has moved around a lot throughout her schooling.

“It seemed like each time I got comfortable at school, we were moving,” she said. Eventually, her family moved in with her grandparents so that her mother could help care for her grandmother. But after her grandmother passed away, her father moved out.

“My mom and I were left with nowhere to go,” said Wood, who said both of her parents dropped out of school before 10th grade.

Eventually, her uncle took them in, and he encouraged Wood to get a good education. She thanked her Access College advisor for helping her navigate the process.

“I knew I could not figure out the college process on my own,” she said.

Now, Wood plans to go to Tidewater Community College and later transfer to Christopher Newport University in pursuit of a business degree.

“For the first time in my life, I feel like I’m on the right path,” she said.

He is the oldest of three siblings who lost their father in a car accident when Foster was 7 years old. But he hasn’t let that stop him.

“My mother taught us to never give up and to turn our tragedy into a victory,” Foster said.

His Access College advisor was “a great help to me and my family,” he said. She helped him make the decision on which college to attend.

“That was probably the scariest part and most stressful,” he said.

He plans to attend Virginia Commonwealth University and major in computer engineering. Eventually, he wants to work for a large tech firm such as Google.

“My parents divorced when I was in third grade, but I’ve never let that be an obstacle,” she said.

She expects to have to pay for college without help from her family, so she has been working two jobs while in high school while also playing softball. With so much to do, she credits her Access College advisor for helping her keep on top of deadlines.

“She has made the process as easy as possible,” Ramos said.

Since 2003, about 3,700 seniors in Suffolk have received assistance in finding funding for college. More than half a million in Access College scholarships have been awarded.

In all, 90 percent of Access scholars graduate within six years, compared to the national 59-percent average, Sutton said.

Corporations, foundations and businesses that have supported the Access College Foundation were recognized during the event.

Sutton also thanked individuals throughout the community for their support, as well as Suffolk Public Schools for being supportive of the program operating in the schools.