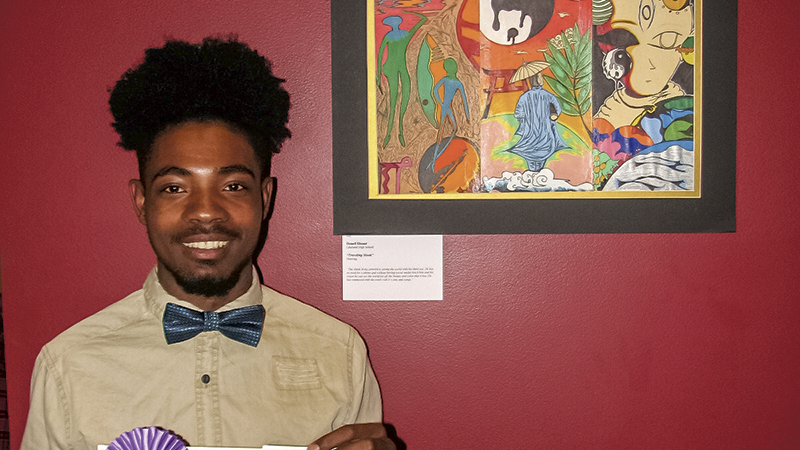 Donell Blount, a senior at Lakeland High School, won Best in Show during the Suffolk Sister Cities International Young Artists and Authors Showcase. The exhibit is on display at the Suffolk Center for Cultural Arts through April 13.

The exhibit will be on display until April 13. It features more than 150 pieces of art, including about 70 essays and poetry displayed in a notebook and about 80 drawings, paintings, mixed media work and photography and computer-generated art.

“What we’re trying to do is encourage talent in the students,” said Mardane McLemore, chair of the Young Artists and Authors Showcase.

“It’s really amazing what their interpretation of that theme is,” McLemore said. “It gets them to think beyond the city of Suffolk.”

The visual art was judged by local artist Nancy Dempsey, and the writing was judged by Nancy Warren. Originality, content, composition and theme interpretation were taken into account during the judging.

Donell Blount, a senior at Lakeland High School, won Best in Show with his drawing, “Traveling Monk.” He created it with colored pencils, marker and stencils.

The first thing I thought was, ‘How can I make this not like everyone else’s?’” Blount said about his artwork.

Blount said he has been drawing since he was young and has taken art classes since sixth grade. He drew inspiration for his art from his interest in monks and their lifestyle.

“He doesn’t have a phone, so he can see the world in colors and not just on the screen,” he said, describing the art that appears to show the monk on clouds looking down at Earth. “He can see everything in the world. He’s seeing it from another planet, almost.”

Blount’s art teacher, Joni Stuart, was not surprised he won.