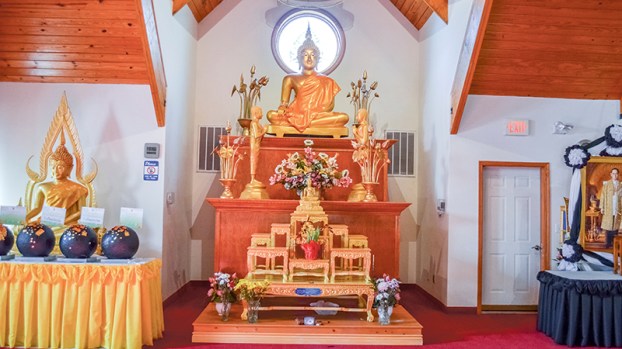 Wat Pasantidhamma in Carrollton will hold a Songkran Festival this weekend.

A local Buddhist temple is inviting visitors to join members in a new year celebration this weekend.

Wat Pasantidhamma in rural Carrolton will hold a Songkran Festival from 10 a.m. to 5 p.m. this Sunday. Hundreds of temple members are expected to come from across the country for the event, which is free and open to the public.

The festival is for the Thai New Year recognized on April 13, also coinciding with the new year for Laos, Burmese and Cambodian cultures. In Thailand it is known as a water festival, with water used for both practical and ceremonial purposes.

“This time of the year is very hot in our country, so the water cools people down,” Hampton Roads Thai-American Association president and Wat Pasantidhamma co-founder Rudee Jacobs said. “Water washes all the bad things away.”

“You pay the elderly, the monks and the Buddha respect, and they give you blessings in return,” Jacobs said.

Food vendors will offer Thai dishes such as sweet rice and ripe mango. Others will sell souvenirs and gifts imported from Thailand. Sand at the temple will be shaped into traditional pagodas for good luck in the new year.

A “Som Tum” competition will be held, referring to the green papaya salad dish that’s popular in Thailand. Teams will prepare their dishes using mortar and pestle, while simultaneously performing a traditional dance for judges.

“They’re going to look at how the people work together, how good their dance is, and how the food tastes,” Jacobs said.

Wat Pasantidhamma — meaning “a peaceful temple in the woods” — was founded in 1998 by a group of Buddhists that wanted a local place of worship. Referred to as “Wat Pa,” the nonprofit organization was the first Buddhist temple established in Southeast Virginia.

It has been one of only three such temples in the state since 2010. Hundreds of people in Hampton Roads attend the temple’s weekly services, and more come from all over the country for its festivals throughout the year.

“Enjoy the Thai culture and the show, music and food,” Jacobs said.

Suffolk riders will go on a scenic journey to North Carolina this weekend for charity. The eighth annual Boogie Run... read more