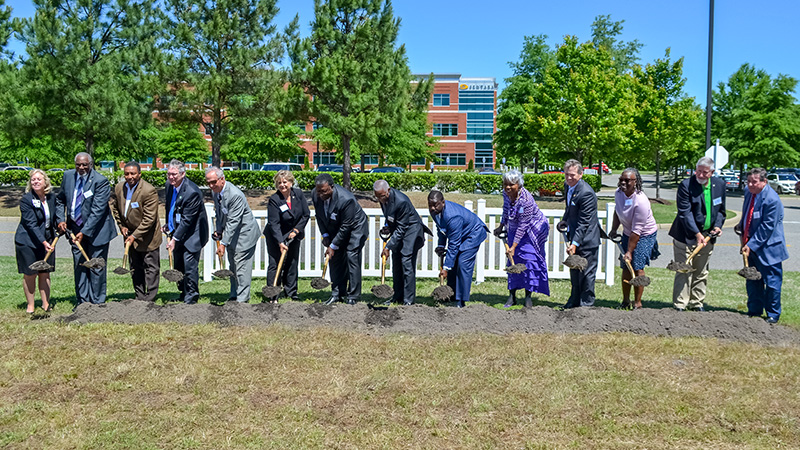 Sentara Healthcare representatives, City Council members and other government officials participate in Tuesday’s groundbreaking at Sentara BelleHarbour. They are joined by members of the Temple Beth El congregation on Bridge Road.

A Tuesday ceremony marked the expansion of Sentara Healthcare services in Suffolk.

The Sentara BelleHarbour campus on Bridge Road held a groundbreaking ceremony for a second medical services building. The $34 million, 85,000-square-foot building is expected to be completed in late 2018, according to the press release.

“This is really exciting,” Suffolk Mayor Linda T. Johnson said. “Sentara has been growing with us for years and here they go again.”

The new building will have an ambulatory service center with two operating rooms. There will also be an expanded emergency department, 14 patient observation beds and more office space.

The four-story building will be positioned on the parking lot in front of the current, three-story Sentara BelleHarbour facility. The two buildings will be connected on the first floor and replacement parking spaces will be added to the campus.

The campus expansion will more than double the current size of the hospital.

“What we are trying to do here is build a medical destination where one stop does it all,” said Dr. Steve Julian, president of Sentara Obici Hospital in Suffolk, and its subsidiaries Sentara BelleHarbour and Sentara St. Luke’s in Isle of Wight County.

“We will be able to mobilize you to any medical facility you need to go to,” Julian said.

He said this will allow patients to be transported to “quaternary care” facilities such as Sentara Norfolk General Hospital, which are best suited for unusual or complex illnesses that require advanced technology and specially trained physicians that are limited in supply.

A patient can be transported from BelleHarbour to Norfolk General by Sentara Nightingale Regional Air Ambulance in about eight minutes. Johnson said services such as this improve the quality of life for Suffolk residents.

The improvements to outpatient services, combined with the centralization of specialized medical care at Norfolk General, will also reduce costs for both Sentara and the larger medical system, Julian said.

“It doesn’t cost as much to deliver an outpatient service than an inpatient service,” he said. “We’re very optimistic to what this is going to bring to Hampton Roads, not just Suffolk.”

Johnson made it clear what Sentara’s expansion means for Suffolk.

“It means jobs, it means opportunities, and it means growth,” she said. “That’s a very good thing.”