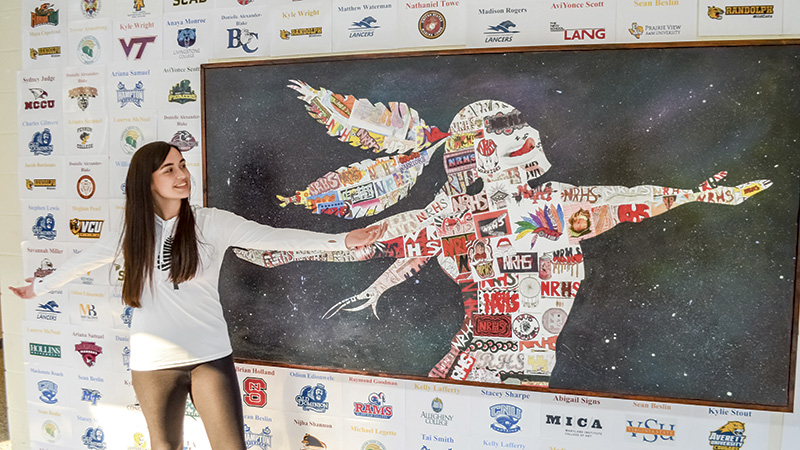 Nansemond River High School senior and class valedictorian Savannah Miller, 18, poses in front of a wall of students with their college acceptances. Miller was accepted to 14 different colleges, and each can be found on the walls.

Savannah Miller was born into a theater household and raised by the stage, according to her mother, Dr. Joleen Neighbours, director and Fine Arts Chair at Nansemond River High School.

The long hours by the footlights clearly made an impact, as Miller just received top honors in a statewide theater competition.

Neighbours recalled bringing her daughter to the first play she directed at the school, when Savannah was very small. She said her daughter played by the stage while she directed the students, the same stage on which Savannah would perform years later.

“She literally grew up around this,” she said.

Savannah will graduate as valedictorian of her class at Nansemond River High School. The 18-year-old will attend Dartmouth College in New Hampshire to continue a theater career that spans more than a decade.

“I’m interested to see how I’m going to develop as an actor when I’m away from the same building and productions that I’ve seen and helped since I was 6 years old,” Miller said.

She was asked to read lines at age 6 during the school rehearsal of “A Midsummer Night’s Dream.” She both amused and amazed the student actors when she eloquently recited lines she didn’t even understand at the time.

“She followed right along and did better than some of the high school students,” Neighbours said.

Miller said she realized theater was her dream in the seventh grade. She was assigned a class assignment about her favorite hobbies and talents, and all she could think of was the stage.

“I realized the only thing I loved doing for 24 hours a day is to act and write for the stage,” she said.

When she began acting as a high school student under the direction of her mother, her fellow actors already knew her well. She said this was both a blessing and a curse.

“I walked in feeling like I had something to prove,” she said. “I wanted to make a name for myself.”

She participated in 12 productions as part of the NRHS performing arts company, five of which were for competitions. Each production required 40 hours of rehearsals over six weeks.

She said she often played characters more diabolical than herself, including Lucy in “Charlie Brown,” the evil stepmother in “Cinderella,” and Rizzo in “Grease,” which was a dream role for her.

“It’s hard at times, but it lets me explore different characteristics,” she said. “They’re fun to play, because they’re different.”

She wrote five stage scripts, all of which placed at Virginia Theatre Association competitions. Her original work, “Anna,” was performed at the 2016 VTA Conference and State High School Theatre Festival.

The play is about a young woman who is assaulted on her school campus. The production focuses on the reactions of Anna’s peers, family, teachers and the school’s dean.

She said she’s passionate about women’s issues and about writing powerfully relevant stories.

“Anna” won VTA HSF Judges’ Award for Best Presentation of an Original Play and State Honorable Mention. Miller was also the assistant director of the play and won State Best Actor for her performance as the defense attorney of Anna’s attacker.

“I thought it was very interesting to have her play the villain that she wrote,” Neighbours said.

Miller intends to write more plays at Dartmouth as she pursues a career on stage. She said she wants to make a living as an actress and playwright, and see her work produced off-Broadway.

When asked if there was a moment when she saw her daughter grow as an actress, Neighbours recalled a performance of the production “AP Theatre” at the 2014 Virginia High School League state competition.

In one scene, Miller had to pantomime the expressions and movements of five different actors behind her on the stage, as she pantomimed reading a book to the audience.

“She nailed every expression and every movement of the other actors without being told,” she said. “She wasn’t even looking at them. That’s when I really saw it, and I think everybody else did too.”