Nansemond River High School football player Gerard Stringer has been plenty busy this spring, as college recruiters have stopped in Suffolk to take a close look at the 6-foot-3, 195-pound athlete just beginning to come into his own.

During the month of May alone, Stringer picked up scholarship offers from Army, Navy, Ohio and UVA-Wise. However, the fifth one, which came last weekend, turned out to be special.

That offer came from East Carolina University, which is a member of the American Athletic Conference and plays some of the best teams in the nation on a regular basis. 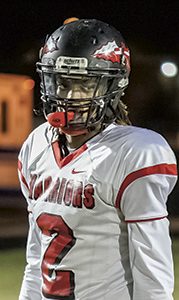 A day after taking in a visit to the school in Greenville, N.C., with his mom, Stringer decided to give a verbal commitment to the Pirates.

“It was amazing. I really loved it,” Stringer said of his visit to ECU. “It’s a great atmosphere with loving people. I’m very excited, because they believe in me and I believe in them. I’m ready to start the next step of journey in my life.”

Assistant coach Robert Prunty recruits the Hampton Roads area for East Carolina. He liked what he saw in Stringer, and so did linebackers coach Ryan Anderson.

Stringer’s length and athleticism appealed to East Carolina, which plans to use him at outside linebacker in its 4-2-5 scheme.

“I feel I’m aggressive — I can cover anybody and can play in the box,” noted Stringer, who finished with 67 total tackles, four sacks and two interceptions to earn honorable mention All-PenSouth Conference honors in 2016.

East Carolina finished 3-9 overall in its first season under new coach Scottie Montgomery in 2016. Prior to that, though, the Pirates were no strangers to success. They finished with a winning record seven times from 2006 to 2014.

In addition, ECU has been able to mold recruits into nationally recognized players that go on to the professional ranks. The Pirates have produced a total of 25 All-Americans and more than 60 NFL draft choices, including Buffalo Bills second-round pick Zay Jones this year.

“It’s a well-known program,” Nansemond River football coach David Coccoli said. “They’ve been successful putting guys in the NFL. They play ACC schools and don’t shy away from competition. He’s getting everything he wants in his college decision.”

“They’re getting somebody who’s not a finished product,” Coccoli added. “He’s raw, his body is going to develop, and they’re going to put him on a solid weight program and he’s going to gain some weight. In my opinion, they’re getting a bright star in the making.”

Stringer viewed ECU’s proximity to his family as another plus.

“His mom and dad are going to be able to go to all the games because it’s close,” Coccoli said. “Two and a half hours is away, but not too far away. It’s closer than Virginia Tech and a lot of other schools.”

Stringer intends to sign a National Letter of Intent during the new period in December.

“He’s a three-year starter and was one of our leading tacklers last year,” Coccoli said. “We return 15 starters from a playoff team. We’re going to move him to inside linebacker, let him flow sideline-to-sideline, and we think he’s got the potential to lead our defense to great things this year.”

Even though he’s made his college commitment, Stringer doesn’t want to rest on his laurels. He’s hoping to put up even better numbers than before and lead the Warriors to their first playoff win in 22 years before getting to ECU.

“For the fans, you are in for a treat,” Stringer remarked. It’s about to be a big wake-up call for everyone that overlooked me. I’m ready to get this work in!”