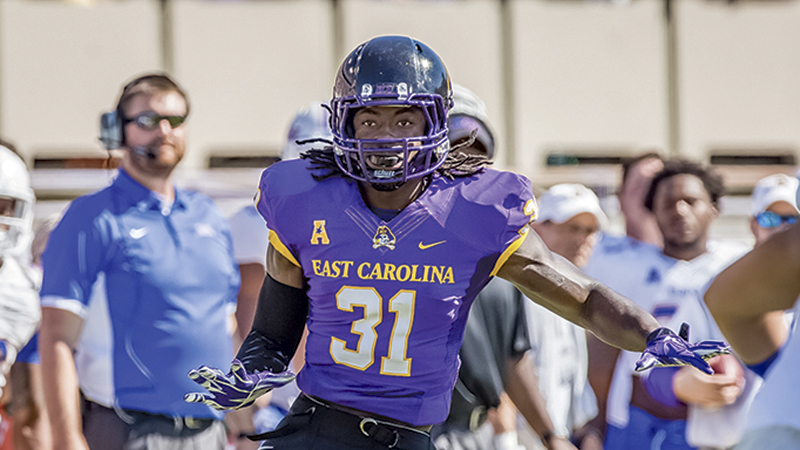 Police in Raleigh, N.C., were working on Saturday to find the person or persons responsible for a Friday-night shooting that left a former Suffolk resident dead.

Anthony Domonique Lennon, 24, a 2011 graduate of Nansemond-Suffolk Academy, was shot in the parking lot of a Bahama Breeze restaurant across the street from Duke Health Raleigh hospital, according to a Raleigh Police Department Watch Commander.

Lennon, who had been a football standout at NSA during his two years at the school, played during the 2011-2015 seasons for East Carolina University.

For the Saints in Suffolk, he played at quarterback, safety and punt returner and was an integral part of the school 2009 state championship bid.

At NSA, he was well loved by teachers and fellow students, alike.

The school’s 2009 football team has organized a GoFundMe page (tinyurl.com/ycuuoq8t) to raise money “to help start a college fund for Domonique’s son,” according to page creator Bayard Mason.

Teachers and friends were active on social media on Saturday, mourning Lennon’s death.

“I am devastated by the loss of my sweet Domonique Lennon,” NSA teacher Sandra Joyner Babb stated in a post about his death. “He was more than a student, a friend, a Saint, a Pirate, a son, brother, father . . . he was as special and as precious as anyone could be.”

Police described it as a commercial area and noted that there were other people in the lot at the time of the shooting, though there were no other injuries in the incident.

No arrests had been made as of 6 p.m. Saturday.

“East Carolina University, the athletics department and Pirate football program are saddened by the tragic passing of Domonique Lennon. He made a positive impact on many people during his time as a student-athlete at ECU and earned the respect of both his teammates and coaches. We extend our condolences to Domonique’s family, friends and all those who knew and loved him.”