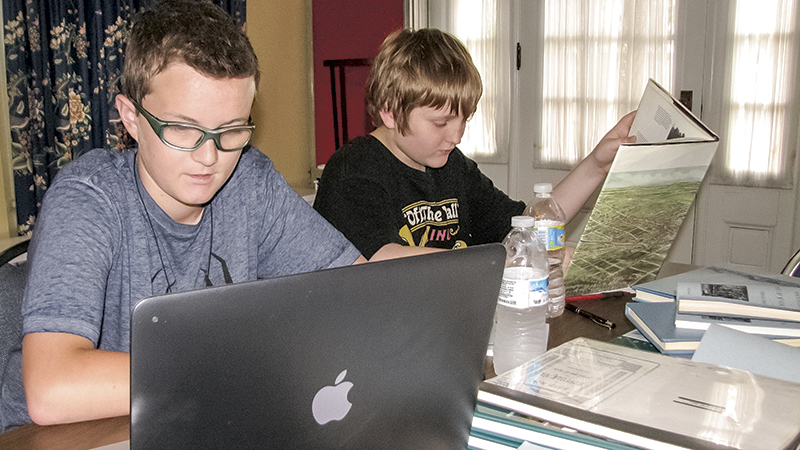 Justice Walters, left, a rising freshman at Nansemond-Suffolk Academy, and Joseph Antonucci, a rising eighth-grader at King’s Fork Middle School, work on researching historic buildings in Suffolk for a coloring book they are crafting with the help of the Suffolk-Nansemond Historical Society.

A group of youngsters has been working hard this week on a coloring book. But rather than filling in the lines, they are creating the book itself.

The coloring book, a project of the Suffolk-Nansemond Historical Society, will help young and old alike learn some of the history of Suffolk while they melt their stress away with crayons and colored pencils.

“Coloring books are pretty big now,” said Sandra Councill, president of the historical society. “We came up with the idea of a coloring book.”

Councill asked middle-school art teachers in Suffolk to recommend students for the project. A dozen students were selected, and they spent Monday and Tuesday choosing their topics and researching them to write one-page histories.

On Wednesday, the students will take a field trip to the sites they are writing about. They will spend the rest of the week drawing their subjects in coloring-book format.

“I am very impressed with the students,” Councill said.

The students said they wanted to participate because it was a good way to combine talents and passions for writing, drawing, history and other topical areas.

“I really like drawing,” said Alisa Chandler, a rising seventh-grader at John Yeates Middle School. “History is my favorite subject, too. It was just all around a good fit.”

Alisa chose the Great Dismal Swamp and the Nansemond County Courthouse as two of her subjects.

Violet Johnson, a rising seventh-grader at Nansemond-Suffolk Academy, chose Riddick’s Folly and the farming industry as her topics.

“When I was in third grade, we went on a tour around it, and it was really cool,” Violet said about Riddick’s Folly. She chose farming because she wanted to do something related to crops or animals.

“I thought it would be fun to make a book to help teach the kids in Suffolk about the history of our city,” she said. “I’m having fun.”

Carter Lydon, a rising freshman at Nansemond-Suffolk Academy, said the project has been “pretty fun” so far.

“I like drawing things,” he said. “I decided it would be good to put that to use.”

He chose prehistoric times and the railroad industry as his topics.

“I like trains and the history behind them, and I like science, so I chose the prehistoric times,” he said.

“I think I might be a little bit better at writing, but I enjoy drawing,” he said. “It’s going to be cool to see it all come together. I found it really cool to have my work published and get to know Suffolk better.”

Councill hopes the books, perhaps 48 to 60 pages, will be available for Christmas. A book signing for the students is planned around the first of December.

If the project is well-received, Councill said, she would like to do it again for the time period of 1850 to the present.

The project has been funded by a grant from the Birdsong Foundation, Councill said, and the Suffolk Art League and Suffolk Tourism have also supported the project.