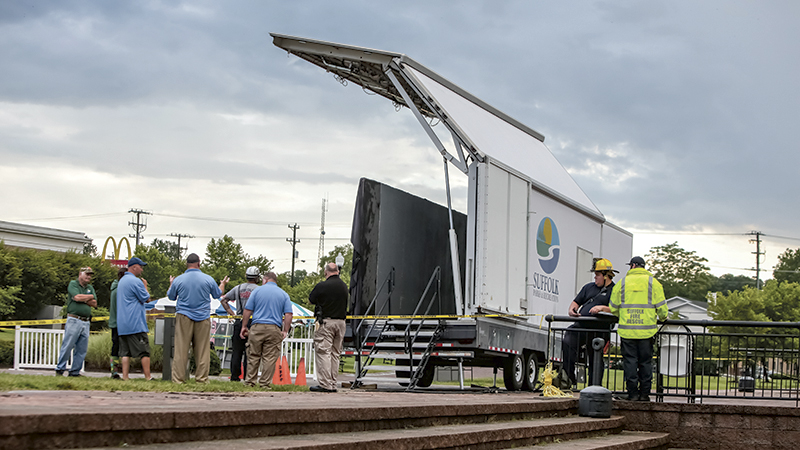 Workers look at a stage at Constant’s Wharf on Tuesday following a mishap when the stage unexpectedly started to move with people on it.

Suffolk’s attempt at an Independence Day celebration on Tuesday was marred not only by weather that canceled the event but also by a stage mishap that was scary for those watching but, fortunately, resulted only in one minor injury.

The fireworks have been rescheduled to next Friday, July 14. The TGIF concert series event will feature live music and children’s activities as well as a shuttle service.

The July 4 event was canceled “out of an abundance of caution” due to weather that had already passed through and threat of more weather throughout the evening, city spokeswoman Diana Klink stated in an emailed response to questions this week.

But during setup for the event, an incident with the stage shook up onlookers and prompted medical evaluation of one band member by Suffolk Fire & Rescue.

Klink said the cause of the incident is under investigation. Part of the stage reportedly began to move while people were on it.

It happened about 5:30 p.m., just as the event was scheduled to begin. It was still raining at the time, Klink said, and those present were mostly city staff and vendors, she said. The band had not yet started playing.

Klink wrote a band member was evaluated for a minor injury but declined medical transport.

Klink sent a press release just before 6 p.m. reporting the event had been canceled.

Fireworks in the North Suffolk neighborhood of Eclipse, as well as many other Hampton Roads cities, went on as scheduled later in the evening, after the weather had cleared.

The stage is being inspected and evaluated to ensure it sustained no permanent damage, Klink said. The city will have to pay about $5,100 for extended use of the barge and fireworks set-up, she added.

The city has been holding an Independence Day event at the Constant’s Wharf site since about 2005 or 2006, Klink said. The last fireworks display to take place at Constant’s Wharf was in 2015. Last year’s event was rained out.

Next Friday’s event will open at 6 p.m. with music by Soul Intent beginning at 6:30 p.m. Children’s activities, merchandise vendors and a variety of food choices will be on site. It is free and open to the public.

There will be no on-site parking for the event. Shuttles will run from First Baptist Church parking lot, located across from the church at 237 N. Main St., and the Mills Godwin Courts Building lot, located behind the courthouse at 150 N. Main St.

Shuttles will run from 6 to 8:40 p.m. and resume after the fireworks.