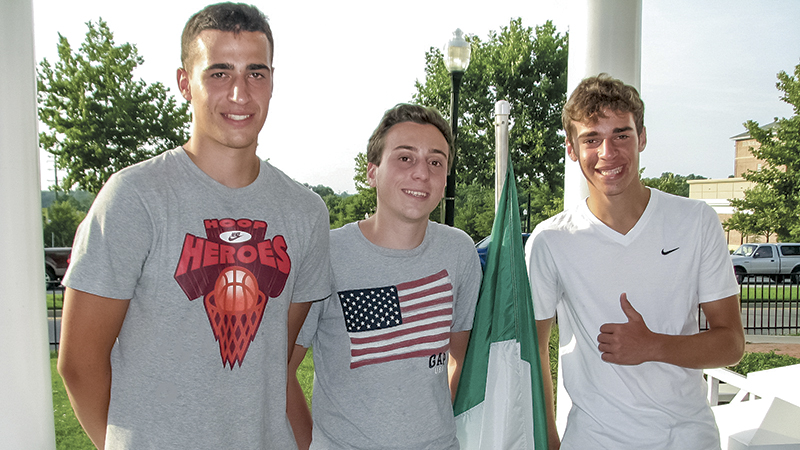 Daniele Barro, Giacomo Matera and Riccardo Barro, all 17-year-olds from Oderzo, Italy, one of Suffolk’s sister cities, pause for a photo during a membership picnic in their honor on Tuesday.

A few dozen people gathered at a picnic Tuesday evening at the Suffolk Visitor Center Pavilion to meet several guests of honor.

The Suffolk Sister Cities group held the membership picnic for members to meet the three members of the Italian youth delegation who are visiting Suffolk this month.

Giacomo Matera and twins Daniele and Riccardo Barro, all 17, are visiting Suffolk for a couple of weeks from Oderzo, its sister city in Italy. Oderzo is the hometown of Amedeo Obici, the businessman and Suffolk benefactor who founded Planters Peanuts after immigrating to America and named Louise Obici Memorial Hospital after his wife.

The trio said they have enjoyed their trip so far.

“I love America,” Daniele said. “When they learn you are Italian, they help us to understand what they’re saying and don’t make too much fuss.”

Suffolk resident Will Wren, 16, stayed with the Barro family last year as part of the Sister Cities youth exchange.

“It was cool how they hosted me and took me all over when I was there, and now I can do the same thing,” Will said.

Riccardo said he wanted to come see Will again and see how he lives in America. Riccardo said he is jealous that Will can already drive, but he can’t, even though he is older. New drivers in Italy have to be at least 18 years old.

Giacomo said this is his third trip to America, as he has visited New York and Boston in the past.

“For me, it’s important to learn English to help me in my future,” he said. “I want to experience the real American life.”

During their visit so far, the three have had a tour of Suffolk, which included Obici House — the home of Amedeo and Louise Obici when they were living — and Sentara Obici Hospital, which retained the Obici name even after being acquired by Sentara. They also toured downtown.

Other places of interest they have seen have included Jamestown, Williamsburg, Charlottesville and Washington, D.C., where they were allowed to choose a museum and decided on the Holocaust Museum.

Each of the three has also been doing separate activities with their host families as well.

“I really wanted to see Washington,” Giacomo said. “For me, it was a beautiful city. I really like your love for your nation, and you are proud of everything. You are very open to other people and different cultures.”

The three said they were surprised by how much newer the buildings are here, as Suffolk is a much younger city than Oderzo, but also by the emphasis on preserving history. They were also surprised by the greenery, as the Oderzo area does not have a lot of trees.

Two Suffolk youth have been visiting Italy for the last two weeks, as well, and are now traveling back by way of Spain, where they are visiting a relative of one of the young men.

Suffolk will also send seven or eight young people, including Giacomo, to the Youth Leadership Summit at the 61st annual Sister Cities International Conference in Virginia Beach this week.

Among them will be Kaitlyn Holmes and Mackenzie Sheppard, both of whom went last year.

“I really wanted to go back, because I loved the people there,” Kaitlyn said. “If you speak your opinion, it’s not right or wrong, it’s just your opinion. Nobody judged you on how you dressed or spoke.”

Kaitlyn said she also wants to return because this year’s theme deals with the oceans, a topic in which she is interested.

“The people are really diverse there, and you experience so much,” Mackenzie said. “I was so impressed with the people and what I experienced, I just had to go back.”

A group of 16 adults from Suffolk also will visit Italy this September.

Sister Cities leaders said the group’s programs are important for a number of reasons.

“It’s our future,” Donna Standish said. “The international experience is more important, for them to get to know each other, now than any other time in history.”

“We consider ourselves a global society, because we have internet and movies and things, but those are not people,” Maryanne Persons added.

Call Persons at 539-7188 for more information about Suffolk Sister Cities. In addition to Oderzo, Suffolk also has a Sister Cities relationship with Suffolk County, England.