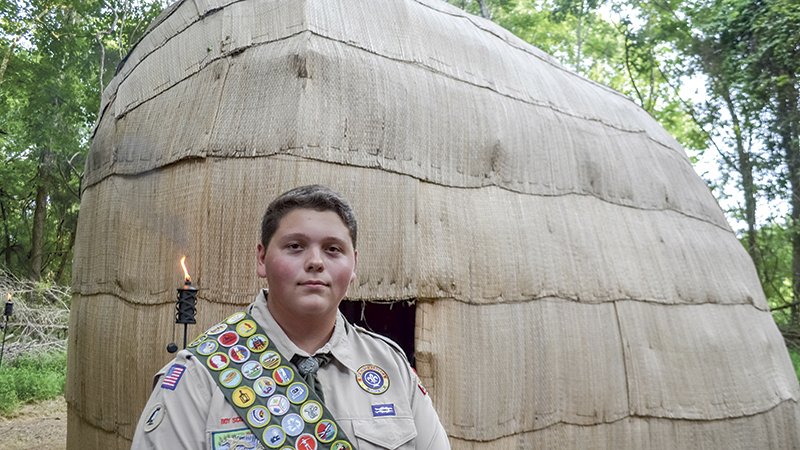 The ceremony recognized 16-year-old Troop 16 Eagle Scout Nolan Long for his Eagle Scout project, a chief’s longhouse and lean-to structure. The project’s completion marked another addition to the ongoing construction of the authentic village.

“I am truly honored to have been given the opportunity to give back to my community and to be a part of such a worthwhile project,” Long said at the dedication ceremony. “Being able to be a part of teaching the history of the Nansemond Tribe to visitors for years to come is a huge honor, for which I am very thankful.”

After Long’s project proposal was approved last year, he met with Suffolk Elks Lodge 685, American Legion Post 88, Suffolk Business Women and other donors to raise more than $2,000 for the project. The undertaking required 60 reed mats, about 10,000 feet of twine and more than 125 gum tree saplings, along with other supplies.

Construction of the approximately 26-foot long, 13-foot wide and 18-foot tall longhouse began in April 2016. Tribal representatives taught Long and others how to shave the skins from the saplings with draw knives to prevent bug infestations, and how to bend them into shape for the building’s structure.

“Many came to all eight work days, which lasted an average of eight hours each day in the rain, snow, hot and cold,” Long said.

Troop 16 senior patrol leader Robert Gardner recalled the grueling tasks of preparing each sapling and lashing them together, and sewing reed mats together for the structure.

“Everybody had to take part in it at some point,” the 16-year-old Gardner said.

Several in attendance Monday evening were impressed by the time and efforts the Scouts put into the project, which was completed on March 25.

“It’s amazing that they could build that by hand,” said Suffolk Business Women board member Susan Draper.

Troop 16 has made several contributions to Mattanock, and more projects are in the works.

Eagle Scout Hunter Ward’s project earlier this year provided two authentic long houses and a lean-to shelter. Other Scouts will add woodchips and mulch to combat overgrowth on miles of walking trails, and another has proposed to build a 40-foot flagpole shaped like an arrow, with lights that will allow it to be seen from the Nansemond River, according to assistant scoutmaster Jeff Ward.

“It just edifies our grounds here,” said Nansemond Tribe Assistant Chief Samuel Bass. “We feel these grounds are sacred not just for us, but for the community, as well.”

The city agreed to return 71.15 acres at Lone Star Lakes to the Nansemond tribe for Mattanock Town, a native village and year-round cultural center. Tribal leaders were given a five-year deadline to open the village, which expires in 2018.

Bass said the tribe plans to meet with the city to discuss this agreement a few weeks after the tribe’s powwow celebration on Aug. 19-20. He said the tribe has the city’s complete support.

Long said the project taught him much, whether it was showing other Scouts the techniques he learned from the tribe on preparing the materials, or meeting with donors to secure the supplies.

“It feels good to be finally done,” he said. “It took a lot of resources, but it makes me proud.”